“Thanks to iPad and @Marvel app, I am now reading comics again after 20 yrs! After 2 days and 50 bucks, finished #Whedon/Cassaday X-Men. “

The iPad has arrived. 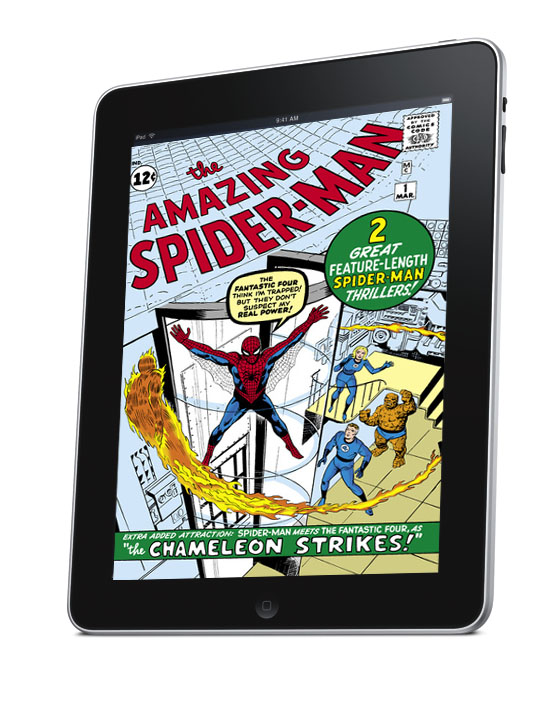 And while it’s not the comic book killer some experts thought it would be, it’s very much a sign of things to come. Now the question is, is this a good thing or a bad thing?

Comics have been available as downloads for quite a while in a variety of forms. Illegal downloads have covered a ton of of formats and delivery systems over the years. I had a friend that downloaded comics into an R4 cartridge (a dubious legality cartridge which allows for you to download pirated DS games, music and such on to a cartridge) and read them on her Nintendo DS. I’ve seen comics pirated and turned into Mac formats, PC formats, various PDAs, laptops, etc.

But none of them ever felt quite right.

As for legal downloads, Marvel has been experimenting with them with limited success for a number of years. IDW’s mobile download system has been decent but up until the iPad, we haven’t had much to view comics in their approximate size. The Sony E-Reader and Amazon’s Kindle don’t do comics legitimately and even if you crack them, they’re still not in color which most comics are.

But what does the iPad (or iPad like technology) mean to comics?

Well it depends on how it’s handled. Right now, Marvel’s got a good idea, they just might want to go a little further. Here are my thoughts.

The iPad may not be the comic book killer but it is a game changer. And this is only the start. We are going to get better iPads down the line not to mention whatever Apple’s various competitors are going to bring out. Once you open Pandora’s Box, it’s really hard to put everything back in. Ask the music industry. They waited way too long to jump on the digital horse. Once they did, they got bucked off and broke their neck and now the music industry is in a hospital bed.

But unlike the music industry, the comics industry has been gearing up for this for a while. Between preparation and the fact that the floppy is no longer the money maker for comics (trade sales are where the big bucks are at), comics may not only survive the iPad but thrive because of it.

The only reason floppy comics still exist in a substantial form is because of old timers like me and people who sample comics through floppies. Now imagine if you could get floppies delivered right to your hands, cheaper then in the store and no wait period for shipping and handling from subscriptions? Say if comics were $0.99 downloads (going even a bit further down in price then Marvel’s current model). How many more comics would you try at that price with that system?

And how many trades might that lead you to buying?

Unfortunately, this may affect the comic shop market if they don’t adapt quickly enough. What I would do if I was in charge is the following:

As I have stated, the technology is here and it isn’t going away. I love physical comics, I don’t particularly like reading them from any sort of screen. I like a physical book in my hand while I sit on the couch with a can of Coke nearby. But if I could have both, if I could try out the latest issue of Superman when they bring in a new creative team or the Fantastic Four’s latest Hickman arc, inexpensively, I would and if I like it, on to the trade list it goes. Everyone one wins. Comic companies win. Comic shops win. And think of the new readers this could bring in. Grant hadn’t read comics in twenty years and the iPad brought him back in. Now I imagine he’ll probably buy more on his iPad then in a store but I bet he is more likely to go into a comic shop and buy a trade or hardcover now then he was three months ago. And I’d hazard a guess that Grant isn’t the only one who’s coming back after a time away. Sure it’s a bit of a novelty at the moment, but say one out of three new comic readers try it and stay, that’s still one more hooked.

That being said, there’s nothing like going into a comic shop on Wednesday and chatting with the regulars about the latest in comics.

So far, Apple hasn’t perfected an app for that.