I had a comic book weekend that was both ends of the spectrum. 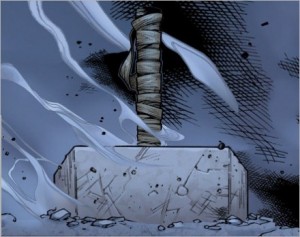 First up was Thor on Friday night.

The first marvel flick of the year and lucky me my girlfriend was dying to go. Since we hadn’t gone to the theater for a while, it became date night.

First off, well done to all of the people involved in Thor.  I’ve always stated from the beginning of this Avenger’s film build up that Thor was a tricky beast; it is both the most complicated super hero film of Marvel’s cannon (because you kind of have to take Lord of the Rings and smash it into a superhero film) and weirdly enough, the least important.

Man I can hear the Thor fans screaming now, let me explain. 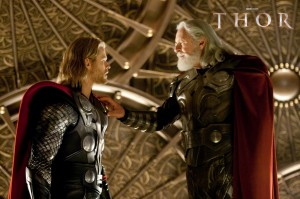 But luckily, the film is very well crafted; solid story, great direction, good acting and most importantly it was fun and felt like Thor.

And out of all the little nerd fan service in the film, my favorite bit was Walt Simonson sitting at dinner at the end of the film.

It played well and certainly better than many other origin films.  I’d love to see another Thor film and I’m very much looking forward to Captain America and The Avengers because of how good a flick this was.  It should be noted that my girlfriend also loved it… but she’s a little nerdy too so that might be a moot point. 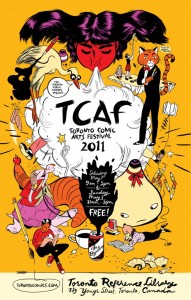 I followed my mainstream comic evening with a huge left turn into indy land with TCAF.  Now I imagine if you follow this site you’ve read a ton of raves and reviews about the event but here’s the thing: I’m not really an indy comic guy.  And I’ve never been to TCAF.

Out of all the comic book related event in our province, TCAF (the free one) is the one I’ve never been to.  It’s not that I’m against indy comics or web comics (in fact, I think they play a very important part in comic book culture), I’m just not huge into them, so essentially I went Saturday as an observer rather than a participant.

TCAF is incredibly well put together, especially for a free/volunteer event; volunteers are helpful, maps are well laid out as are schedules.  Panels are very well put together and moderated.  I love seeing all the tables or artists known and unknown beside one another.  The thing that I took from the artist’s floor was that I didn’t see an artist or creator who wasn’t smiling.  That’s a pretty telling sign if you ask me.

I managed to catch a few panels. I will say, TCAF has a definite one up on Hobbystar in this category.  Some of the panels were at a bar!  I got to hear professionals talk about comics and drink beer and eat poutine.  How awesome is that?

This first panel I entered was about web comics.  About four minutes in I realized it was aimed at children.  I felt very creepy so I left.

The next panel over at The Pilot (a bar so much less children) was for the cartoon show Adventure Time… which I had never seen but my colleague, Nic from Bite Daily was a huge fan of.  Must admit, after the panel I wanted to check it out. It’s a bizarre cartoon but fun.

Following that was about Canadians Keeping the Canadian Identity While Working in A Global medium… or something. On the panel was Darwyn Cooke, Ray Fawkes, Kathryn and Stuart Immonen, and Jillian Tamaki. Darwyn once again cemented himself in my mind as one of the wisest and funniest men in comics. An interesting panel filled with many anecdotes about American’s slight lack of Canadian knowledge as well as issues I hadn’t thought of in terms of a Canadian working in an American company.

I also was lucky enough to get The Outfit signed by Mr. Cooke which made me 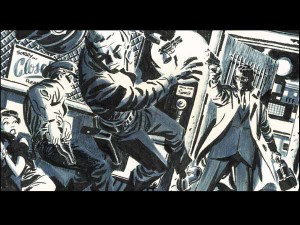 incredibly happy (as it was one of my favorite comics from last year).

After that panel I happened to run into the one and only Kevin Boyd from The Shuster awards.  While Kevin would not reveal the status of my lifetime achievement award, we did have a nice chat.

All and all a great experience and I will definitely try and make more time in my schedule for TCAF next year. As I said above, I’m not huge into indy comics but they are an incredibly important part of the industry.  They provide a wide variety in comics that is needed in order to keep the medium growing. I love Mythbusters, I pretty much watch it every time I see it on. But if there was no other choice beyond Mythbusters, I’d be annoyed.  Hell even Glee has its place… to be mocked.

Web comics as well.  While some see quick and easy reads, there are many that are a longer narrative format.  It should be also noted that web comic creators were and are still well a head of the curve when it comes to online comic delivery.

A great time was had and I hope to make a repeat next year.

*Personal note: Many of you might not be aware but I’m also heavily involved in a podcast called TATANS. We’ve just created a brand new fan page.  Check it out and be sure to check the podcast too.