This week there is no over arching theme to the column.  I’ve got a pretty big one in the works about the last decade in comics and I’ve written a bunch of articles this week on various comic topics but a lot of little new bites came out so I figured I’d take a quick look at everything.

When last we saw Bruce Wayne, he was a cave man painting on cave walls.  Now it appears that he will be a viking, a pirate, a cowboy, a pilgrim and lord knows what else.  Grant Morrison will be penning a series that will somehow bring Bruce back through time (I’m thinking kind of like Quantum Leap, Captain America, Slaughter House 5 style).

Under anyone else this could go bad. Under Grant Morrison it will range between good and awesome.

And Speaking Of Which… 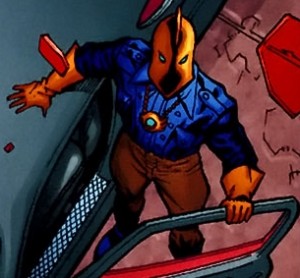 This was revealed by DC’s blog site and USA Today. But the part that grabbed my attention was the fact Grant mentions the Multiversity series.  He mentions that he is rather happy with the Captain Marvel issue that he has written.

This set off three thoughts in my mind.
Apparently this series is in active production stages.  We knew Morrison wanted to work on it but no one’s really stated where it is or even how far into the pipeline the series is. And while Captain Marvel may seem an odd choice for Morrison, if you go back to the original world of Shazam ideas with talking tigers and such all over the place, it sounds like a perfect fit.  It also means I’ll get to see street wise Doctor Fate (seen in one panel in Superman Beyond…but what an awesome design).

And now for something completely different

On the advice of my local comic shopkeeper I picked up the new graphic novel from Bryan Talbot called Grandville, published by Dark Horse. 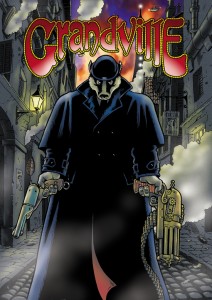 First off it’s really well done but you have to wonder about Bryan Talbot a little. With Grandville he created a book that’s a Victorian noir steampunk alternate reality with elements of James Bond and a mainly furry cast.  The main detective is a badger who is muscle bound, smart and wear’s a bullet proof chain-mail shirt.

And it is every bit as awesome as it sounds.

Wonderful art, a decent story, Talbot keeps up his reputation with this one and it’s worth checking out.

I’m glad he’s back, I’m glad Charlie Huston is writing this revamp.  I just wish they had made it a MAX book if for nothing else that the swearing that appears a rather large amount, didn’t have to be covered up in such a silly manner. Still one of the best designs for a character ever. Half corpse, half robot. What’s not to love?

Everyone is getting all relied up about the fact Matt Damon made an off hand comment about making a good Riddler.

I’m not going to argue the pros and cons of Damon being the Riddle because it’s pointless at the moment. Remember the stretch of time before The Dark Knight and all the crap that was said about that? Phillip Hoffman as The Penguin, Johnny Depp as The Riddler not to mention the big deal that was paid attention to the “secret” Anthony Micheal Hall character that I remember reading rumors that ranged from Robin to mobsters to The Creeper and turned out he was…a small character that had no connection to the DC universe. 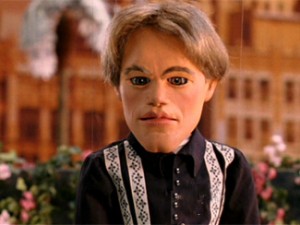 So stop it. Right now. At least wait until three months before the film is scheduled to start.

By the way, I’ve been cast as Vic Sage but shh.

Iron Man 2 however…
Looking forward to it. Apparently Quesada has seen a rough cut. I’ll have to remember to bug him about it at some point. I am curious though, we’ve heard a lot about how all of the next Marvel movies tie into an Avengers film and Iron Man certainly does but I’m curious if Iron Man 2 will lead us further down that path or just keep it’s status quo in terms of connections…hmmm.

What does Brent read?

In the last little while I’ve been told I’m a DC hater, a Marvel booster, a Marvel basher, total main stream comic nerd and stuck completely in the 90’s.

So in an effort to maybe clarify or prove everyone right, I figured I’d post what I am getting at the moment on a fairly regular basis. This includes comics and trades.