Being a writer, I love the idea of “What if”.

Okay not so much the comic book series…not that What If was terrible mind you, I’m speaking more of the question What If as opposed to the comic book What If.

…okay, now I’m sort of confusing myself…. maybe an example is in order.

As regular readers know, one of my other passions beyond comics is music. I’m a very big fan of a Manchester band from the late 70’s early 80’s named Joy Division. 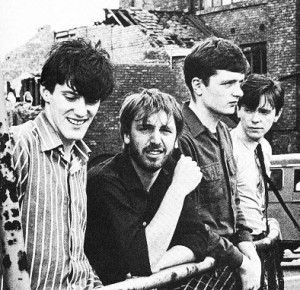 Joy Division were not huge in their day but their music was amazing and on the eve of their North American tour, the band’s lead singer and lyricist, Ian Curtis, killed himself.  Subsequently the band didn’t tour and reformed under the name New Order (which you may be more familiar with). Joy Division became kind of a cult band but an incredibly important one. They influenced a ton of music styles. Bands like Nine Inch Nails, The Cure, U2, Interpol and a ton more were heavily influenced by them. There is a very solid argument to be made that Joy Division were one of the most important bands in rock in the past 30 years.

But, what if Ian Curtis hadn’t committed suicide?

How much would this have changed things? Would :goth” music have come around the same way? Would Manchester been as important to alternative music without Joy Division? Would they still have been as influential as they were or would something have gone differently?  For those curious, music guru Alan Cross did an excellent episode of The Ongoing History of New Music that included his theories, highly recommend searching it out.  And speaking of which, Corus, why on Earth did you let the man go?

And comics are no different.  There are a ton of real life stories regarding comics that are unpublished, creators that left books prematurely, books that mysteriously ended.

In today’s column, I going to throw out one major What If along with my ideas on what would have happened next and a What IF for you to all discuss and play along at home with (and please leave feedback in the comments, this is a topic I intend to return to every once and a while)

What If Image Hadn’t Been Formed?

Essentially, Image was formed by artists who wanted control of their work (as well as possible ownership of their creations) from Marvel. Marvel said no and these artists walked and formed Image Comics.

But what if Marvel went “you know what guys, let’s work out a deal” and then went a head and worked out a fair deal for all of those involved. I know it’s a bit of a stretch but play along.  Editor’s note: it happened a decade earlier with Jim Shooter’s push at Marvel to form Epic and its line of creator owned books.

How would the comic universe been different if the Image founders had stay put? I think certain things still would have happened, here are the bullet points.

Erik Larsen still would have gone on to do Savage Dragon and not with Marvel, but through a company that was starting to experiment with superheroes, Dark Horse Comics. In the end, Dragon would have been the few survivors of the line (Dragon, Ghost and this quirky sort of super hero book called Hellboy) and still running decent numbers to this day.

Todd McFarlane’s run on Spider-Man would have continued a lot longer with less editorial interference and the book would have gotten a little weird. Eventually Todd would end up back at DC working on Batman again but this time with Frank Miller as writer for six issues. Todd would eventually take over the book for another five issues. In the meantime, Todd uses the very decent paychecks and connections he’s been grabbing to set up a toy company. This company sets up a partnership with Toy Biz (Marvel’s owner) for a line of Marvel figured that knocks everyone’s socks off.

Jim Lee would have stayed on X-Men for a while but eventually moving over to Wolverine where he introduces a new character, Grifter. Grifter catches on with the comic buying public and gets his own series which gets the editors thinking.  After a few years, Lee is given an opportunity along with Joe Quesada to give a shine to Marvel B list characters in a line dubbed Marvel Knights. Quesada helps lure in filmmaker Kevin Smith to work on Daredevil while Lee achieves what is almost thought impossible and convinces Alan Moore to come into the Marvel fold with a new Captain Britain book for 12 issues. This good will leads to Neil Gaiman coming to the company with the reprint and return of Marvelman.

And for you Moore purists out there, just remember he wrote issues of Spawn, a Violator mini-series and Youngblood, not to mention his ABC line was originally a Wildstorm project (or according to Liefeld an Extreme Studios project that became a Wildstorm project) which became a DC project when DC bought the studio. This is not necessarily as out there as it seems.

How different would the rest of the comic industry landscape have been? With no Image rivaling the big two, did anyone step up to fill that gap? I’d like to think Valiant Comics would have but I think they still would have had to deal with the same issues. I think Dark Horse’s superhero line probably would have done better as well but ultimately would have collapsed into a few titles.

When Image was created it did prove there were other like-minded creators out there, would a different group of artists try to pull something similar off?

Now, here’s one for you at home to play with. I look forward to reading you responses and including them in a follow-up column. You ready? 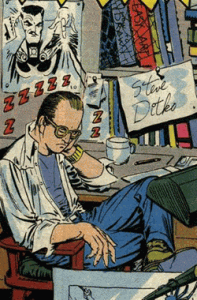 What is fact that for reasons known to a very select few, Steve Ditko left Spider-Man and quickly left Marvel Comics thereafter for an extended period of time. But what if he hadn’t left? What if he had been given a little more freedom? Would Marvel have stayed more or less the same or would something very different have happened?

# Image Comics# What If