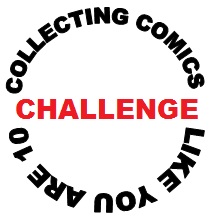 Last November Anthony Falcone wrote an article about “Collecting Comics Like I Was 10“.  The basic idea of collecting like your 10 years old is: “You bought comic books that you liked the cover for, or that had your favourite hero, or that had a crazy fight. And then you spent the rest of your money on candy.”  (taken from Anthony’s column).

I thought I would take Anthony’s column as a challenge (buying the comic books, not the part of seeing how many gummy frogs and gummy feet I can shove in my mouth).  Anthony’s challenge allowance was $20.  So using the guidelines and the budget, here is what I got. 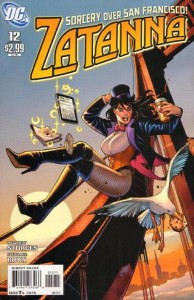 Zatanna #12 – I bought this comic strictly because of the cover (artwork by Amanda Conner).  The cover is fun, plus features a full picture of Zatanna.  This issue is about a villain named Backslash, who can reverse time.  His power comes from a fairy, who is attached to his sword.  Zatanna is working on her spells, which she has to repeat her words backwards.  She finds a group of Mer-People who were murdered by Backslash.  When she confronts him, her magic is useless against her power.  Until the fairy (named Hannah) tells her the power of palindromes (words spelled the same forward and back).  Zatanna words her spells as palindromes, so Backslash can’t reverse them.  Zatanna saves the day.  Backslash goes to jail.

Zatanna is not one of my regular books.  Since I am not a regular reader, this was a good book to buy.  It is a stand alone issue.  There is enough in the story, that I can figure out what is basically going on outside of this issue.  It is a fun and interesting read.  Plus who doesn’t love a magician in fishnets? 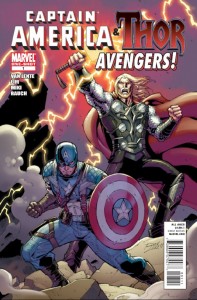 Captain America & Thor: Avengers! – Captain America currently is my favourite Super Hero right now.  The cover is also what drew me to this book, because Cap and Thor are drawn like their movie versions.  Which this book does take place within the Marvel Cinematic Universe.  Originally I thought this comic would have been a Marvel team up, but instead it is two different stories.

The second story is about Thor, Loki, Sif and the Warriors Three (minus Fandral) as they fight their way into the land of the Dark Elves.  Fandral has been captured by the dark elf Queen.  Thor plans a frontal attack on the Citadel of Spires (where Fandral is kept), while Loki plans on sneaking in the back way.  Thor battles Kurse, the elves greatest warrior.  Loki confronts Malekith who uses treachery to beat Loki (like that’s gonna work).  The Asgardian warriors defeat the elves and escape with Fandral.  The final pages says The Saga Continues in a Theater Near You!.

Both stories were written by Fred Van Linte and illustrated by Ron Lim.  The art style contrasts between both stories.  The Captain America story features crisp, sharp lines  while Thor’s has softer lines and an aged look.  This book is what Marvel needs.  The book is rated all ages and is connected to the Marvel movies.  There needs to be more of a link between the comics and the movies.  There are a lot of Marvel movie fans, who wouldn’t necessarily read the comics.  This book can help bridge that gap. 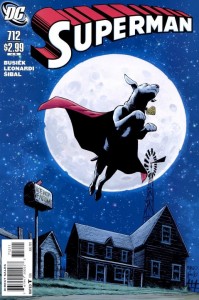 Superman #12 – I bought this book only because Krypto is on the cover.  Who doesn’t like reading about super powered animals?  The editors note on this story says “Sorry for the Grounded delay, but enjoy this lost classic set after Superboy died in Infinite Crisis”.  It looks like I bought another self contained story comic book.  The book features a mix between flashbacks and real time.  Krypto is remembering the fun times he had with Superboy.  After Superboy dies, Krypto goes searching for him.  Eventually Krypto realizes Superboy is gone and he leaves Earth himself.  Krypto returns briefly to the Kent farm to grab a manhole cover (which Superboy used as a Frisbee), then returns to space where he is hiding on an asteroid.  The final picture is very emotional.  Usually we see the emotion of people losing their pets.  This is one of the first times in comics where I see a pet mourn their owner.

Originally I thought the story was a bit weak, but after reflecting on the story, and studying the panels, it is a very emotional and strong story.  I really enjoyed it, but that’s enough about sad dogs, it’s bringing me down man! 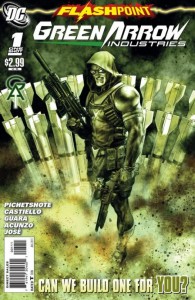 Green Arrow Industries #1 (Flashpoint) – I bought this book because it had a really cool cover.  I haven’t been following Flashpoint, so I am a bit lost on the main storyline.  But since this is a one shot issue, I figured out I was safe to figure out the story.  Oliver Queen owns Green Arrow Industries, a weapons manufacturer.  Instead of developing new technology, GAI takes super villian technology, and adapts it for military use.  While Oliver is presenting the latest weapon to the government, GAI is attacked by a terrorist team.  Oliver defeats the remaining terrorist, and learns that it is his daughter.  Oliver tells his daughter that the world needs a company, to step up and become a “Super Corporation”.  A company the people can trust, who can protect the public.  The story ends with GAI technicians saying they can weaponize Oliver’s daughter’s technology, which made her a super human.

I really like the cover to this book.  I felt the story was weak, and I could have easily passed on this book.  It proves Green Arrow is better when he has his bow and arrow.

You should try to take this challenge yourself.  When you buy something different, you never know what you’ll get.  You may just find you new favourite title.

If you take the challenge, leave a comment below.  What book did you buy and why?

Oh and by the way, the burrito was delicious.