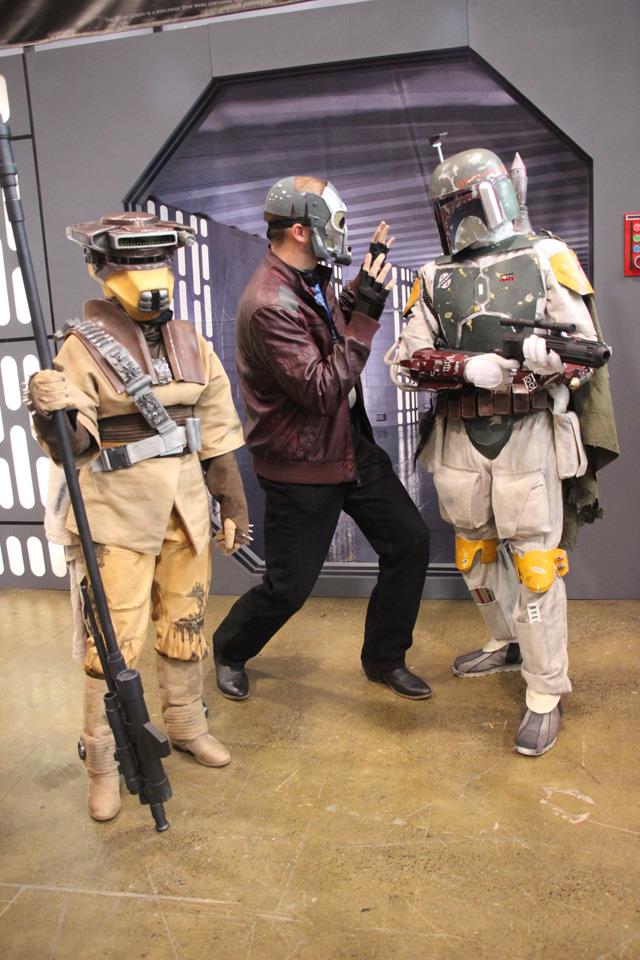 Wow… what a weekend for Fan Expo.  I don’t think I’ve fully recovered yet.  It was an insanely busy 4 days of comic book, video game, Sci-Fi and horror fun.  If you missed out on Fan Expo this year, you missed out on one of the best I have ever attended.  Sure there were some hiccups and bumps along the road for this year’s show, but all in all it was the most attended and in my opinion most successful Fan Expo’s in it’s 20 year history. 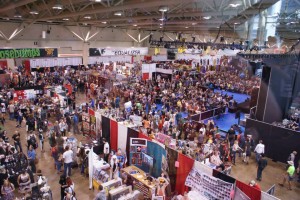 From talking to people in attendance, I heard mainly positive reviews.  There were complaints about the long lines to travel between the North and South buildings on Saturday.  There are only a few ways to travel between buildings so it’s bound to become congested.  That’s not a fault of Fan Expo, it is just a reality with the design of the Metro Toronto Convention Centre.  I also heard some complaints about the price for autographs and photos with the celebrities.  Some celebrities were charging upwards of $110 for a photo before applicable fees.  That is too expensive for a picture and a few moments of someone’s time.  The reality is people were willing to pay those prices because the lines were long, and I didn’t see anybody forced against their will to pay to see a Dr. Who or a former “Space Cowboy”.  Everybody has a different perspective when it comes to Fan Expo.  While some value the comics or video-game aspect of the show, others are excited to see celebrities and personalities who are in attendance. 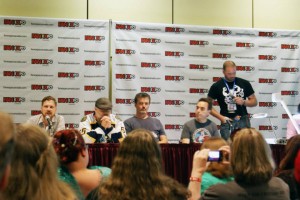 On Friday I was offered the opportunity to moderate the Captain Canuck panel.  It was the first time I have been offered the chance to moderate a panel at Fan Expo.  I jumped at the opportunity.  The panel consisted of Paul Amos (from Lost Girl and the voice of Mr. Gold), Paul Gardiner (Creative Director), Kalman Andrasofszky, George Zotti (Silver Snail), Walt Durajlija (Big B Comics), Richard Comely (creator of Captain Canuck) and Faddi Hakim (President of Captain Canuck Inc.).  There was a showing of the Captain Canuck webisode in its entirety, and the announcement that it is available on DVD with special features that include interviews with the creators by Dr. Stevil.  The crowd was informed that the progress on the new comic has been slow, but is still moving along.  It should be in print by early 2015.  The producers are also working on an animated feature film, and a live-action feature film is still in the works with the script heading into second draft.

2015 is the 40th anniversary of Captain Canuck and you can expect big things coming out for the anniversary. 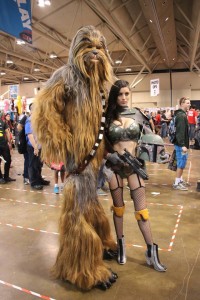 If you spotted Dr. Stevil walking around Fan Expo with “Star-Lord” in tow carrying his gear or filming his interviews, that was me.  I have been a friend of Dr. Stevil for a while now, and help him out from time to time being his videographer or cameraman.  He has a talent for meeting people and he pretty much knows everybody.  He has introduced me to so many people in the comic book business, I am truly in his debt.  Some of the people he interviewed (with me providing camera duties were) Tom Cook, Jason Loo, John Gallagher, Jason Fabok, Ivy Doomkitty, and the legendary Neal Adams.  On top of that he interviewed countless cosplayers and convention attendees.  Stay tuned to his YouTube channel to catch these interviews.

One of the most talked about booths at Fan Expo was the MeCreo 3D booth.  MeCreo 3D uses 60 cameras to take a 3D image.  That image can then be replicated on a 3D printer.  The detail in the 3D print is amazing.  People were lined up for the opportunity to have their picture taken.  Many of them were cosplayers.  It’s a perfect keepsake for a cosplayer because it provides more detail than just a regular 2D photo.  It is something you can hold in your hand and look at in any angle.  Dr. Stevil and I were also successful in introducing the producers of Innerspace to the MeCreo 3D team.  Innerspace host Morgan Hoffman was scanned and will have a 3D model produced of her shortly.  The episode will air shortly on Space Channel. 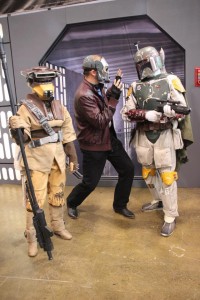 It was a lot of fun being in cosplay for a couple days too.  I geared up as Star-Lord and it went over well with the crowd.  There were a lot of Star-Lord’s there.  It’s pretty clear that Guardians of the Galaxy is very popular right now.  In addition to Star-Lord there were Gamoras, Rocket Racoons, Groots and even a few Drax the Destroyers.  It would have been cool to arrange a meeting of a bunch of GotG cosplayers.

I met professional cosplayer Ivy Doomkitty, and she is an amazing lady.  She was great to talk to and very approachable.  Not only was she excited to meet her fans, she was eager to see my costume.  I talked to her on Thursday when she was setting up, and when I told her about my Star-Lord costume she told me to come back on Saturday so she could see it.  When I came back and showed her, I was surprised when she asked to take my picture.  I thought it was pretty cool that a professional was excited to see my work.  Dr. Stevil had some fun with her on Sunday (again check out his YouTube channel).  All I can tell you right now is it involves “sharks with frickin’ lasers”. 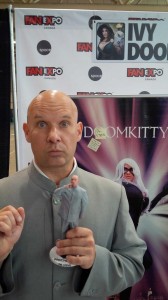 This year Fan Expo was very successful for me on all fronts.  I’ve gained recognition as a cosplayer.  I was able to hone my interviewing skills (with the help of Dr. Stevil).  I got some hands-on education on how to produce television by watching the production crew of Innerspace.  I also had the amazing experience of moderating a Fan Expo panel.  It was so much fun, I can’t wait to see what Fan Expo 2015 has in store.

Which Weapon Would I Choose