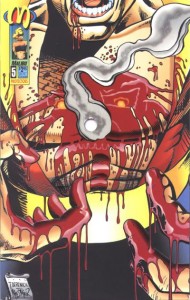 My experience with them kind of runs the gauntlet. Read since I was a kid, got hard core as a teenager, sold them as a staff member at a comic shop, written them as a would be professional and now with this column and my podcast, I critique them.

But one of the things that worries me at the moment is that a lot of what’s going on in comics right now reminds me of a time where things looked really bright and then hit a brick wall like a mack truck going 200 km an hour.

While sales are nowhere as huge as they were back then but as a guy who lived through those times as both a reader and worker, there are a few things that looks a little too familiar.

This is a very small gripe as I have come to accept there will always be variant covers on the bigger books.  Usually these covers can be pretty cool.  For instance, with Buffy I tend to get the Jo Chen painted covers (standard) but when Pete showed me the Xander as Nick Fury variant from a few issues ago, I had to have it. But worries me is some of the gimmicks are starting to slowly creep in. The world does not need limited print foil laser etched covers.

And gimmick comics seem to be slowly sneaking back in.  3d use is back on the rise which sometimes can be good (the recent Superman 3d, Seduth and Black Dossier come to mind) but it can be used for a cheap sale.  Lord I hope we never see another bullet hole comic like that issue of The Protectors… that’s right, a real hole through the center of the entire book. 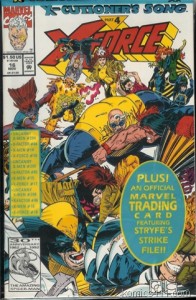 Recently I was in my local shop and one of the guys who worked there tried plugging Blackest Night to me. I said thanks but no thanks.

You see loyal reader, I got sucked into being a more serious collector through X-Force. Issue 1 came with a trading card (I believe I got Shatterstar) and for whatever reason I really loved Rob Liefeld’s work on the book. The only problem was it was an X book which meant it had ties to X-Men, X-Factor, etc. For whatever reason X-Force was more or less left along for a while until X-Cutioner’s Song.

Now keep in mind, I was a young teen with no job, who’s parents (who were awesome enough to buy me comics) could only really afford to pick up one comic a month. Now this crossover was thirteen parts.

Since I could only get X-Force, I ended up with only three chapters. Chapters 4, 8 and 12 to be exact.

Now writing was not the strong point of the X titles to begin with at that points (the exception being Peter David’s X Factor which had a few ideas that were way a head of it’s time) so this crossover doesn’t make a hell of a lot of sense as a whole.  Now when you jump in and only get to read 3 chapters of it, it makes even less sense. To this day, I have no idea what, if anything, the title meant….will other the obvious of Professor Xavier getting shot.

This was followed by another X crossover in the annuals and I was done.  I swore that I would never become involved with a crossover while it was going on.  If reviews were good, I may pick up the trade. Most of the comics I read in trade form tend to have little to do with these huge crossovers so I’ve pretty much kept to my promise.  The last one I picked up was Final Crisis in trade.

And on the off chance DC feels slighted, don’t worry, I don’t read Dark Reign either.

Okay on this one, I admit, I was part of the problem.  During the 90’s the big stars of the show was the original Image guys.  They tended to draw people that defied the laws of physics and steroids.  I was at the time a huge Liefeld fan. I own his entire run on X-Force and most of the initial Youngblood books. 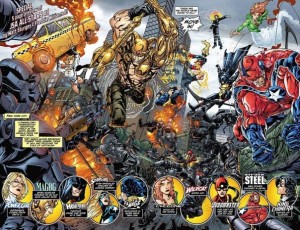 But slowly some of these artistic traits are creeping their way back in. Looking at the preview for that new JSA series just sends shivers up my spine. Like look at Citizen Steel…dude could give 90’s era Bane a run for his money on steroids.

But the one thing that seems to be the current trend that I really like about now compared to then is that comics are really for readers still.  Sure there will always be guys who buy comics for a collection for monetary value but right now a majority of people buying are readers.

Case in point, my shop has an over abundance of retail incentive covers. Why?  Because the people who frequent the shop could care less and would prefer to buy the $4.00 book as opposed to the $9.00 because the minute the get home, it’s being debagged and read.

And that is a good thing.