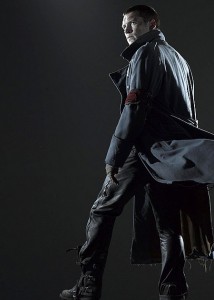 Rising Superstar Sam Worthington has signed on to appear in the film adaptation of Rick Remender’s upcoming miniseries “The Last Days of American Crime.”

Created and written by Remender with artist Greg Tocchini, “Last Days” takes place in the near future where the U.S. government is about to implement a new technology that will make it impossible for anyone to commit a crime. Following the revelation of this plan, a downtrodden career criminal named Graham Brick is forced to quickly assemble a team to help him pull off what may be the last heist in American history.

According to Mania.com, Worthington will portray Kevin Cash, a safecracker recruited by Brick who may be a dangerously unstable sociopath.

Worthington has quickly become one of those go-to australian actors (past contenders have been Mel Gibson and Russel Crow …while Guy Pierce seems to have waved that away) for big budget directors looking for someone broody and intense.. which is hilarious, because if you watch this interview clip – the dude is totally laid back.

Rememder is having a banner year, being promoted as one of Marvel’s top new writers and having pretty much all his comic book optioned. (Fear Agent I believe was picked up earlier this year and I really think that would make a great film – though the comic is better.)

Remender gave MTV News an exclusive first look at “Last Days” and some of the inspiration behind it.

“I took that Orwellian world to the Nth degree and came up with an idea where the government has discovered a frequency that basically hinders a human from doing anything they know to be unlawful,” explained Remender. “Basically, this frequency makes it impossible for you to jaywalk, steal, cheat on your spouse… If you know it’s unlawful, you can’t do it. But two weeks before they throw the switch, The Washington Post breaks the story and the country goes crazy.”

“With the world stage in chaos, [Brick] has two weeks to steal this thing,” continued Remender. “And if he doesn’t do it in that time, he’ll never be able to do it again.”