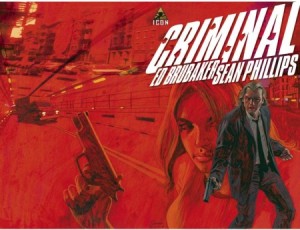 The first crime novel I can recall reading as a mature reader was Andrew Vachss’s novel Sacrifice. It was one of the Burke books, following a mysterious and quiet possibly dangerous fellow on a quest to bring back a kidnapped child that was being sexually tortured and possibly being sacrificed to voodoo spirits.
It was a book that opened the door to a genre that I fell in love with.  I read the rest of Vachss’s books at the time and then went from his suggestion and checked out Joe R. Lansdale.  From there I found Richard Stark and then eventually the granddaddy of them all, Mickey Spillane.
But weirdly enough I had never really read crime comics.  I wasn’t ever a big fan of the old school EC crime line and never really gotten into the few modern crime comics that existed (with the exception of Sin City which basically got picked up due to my then man crush on Miller’s work).
Then one day, I walked into my local comic shop and the friendly shop keep asked:
“Have you ever read Criminal?”
I was a real late comer to the Ed Brubaker train.  I had never read Sleeper, I had dropped Daredevil before he had come on so as far as the quality of his work was concerned, I had heard good things but due to a limited comic buying budget, had yet to try anything.
“No.”
“Awe, dude…tell you what, try it, I guarantee you will like it.”
Like turned out to be an understatement.  I loved the first book., Coward, and became intrigued about the next volumes (as I knew they didn’t follow the same characters but all kind of revolved around the same city).
I bought the other three in a matter of two weeks.  They were that good.
Brubaker and artist Sean Phillips work incredibly well together that it really reminds me of when Matt Wagner or Frank Miller hit’s their stride.
Okay that may sound a little odd, especially considering their works, let me explain.
I have been always of the opinion that comics come much easier to one guy then it does to a duo. Frank Miller and Matt Wagner being two really prime examples. It goes straight from mind to pencil and when you read the book, it seems that way.
I often get that same feeling with Criminal.  There’s no skips or pauses, it just seems that there was no struggle, it arrives fully formed and awesome.
The nice side effect of Criminal is the fact that it has opened the doors for other crime comics to come to a little bit more attention.  I’m not saying that books like Darwyn Cooke’s adaptation of The Hunter wouldn’t have been published but now that crime comics are once again more prevalent it got more of the attention that it rightfully deserves (for the record, as it stands The Hunter is my favorite for graphic novel of the year).
Now if someone could convince Greg Rucka to do a crime series (like a straight crime book with out the word Bat attached), I’d be even more happy.
Thank you Criminal, can’t wait to read The Sinners arc.