Reviewing indy comics can be a tough business, that’s why I tend to shy away from it. The problem I see a lot of mainstream reviewers have is that the try to hold independently produced comics to the same standards they would hold a Marvel or DC; paper, print and color quality, etc.  And then you get the other side of the argument where a reviewer loves indy stuff and won’t compare it to anything by a major publisher despite the fact that the comic is xeroxed on old news print and generally looks like crap.

It’s the hardest thing in the world to call something like this straight down the middle. and like I said, I try to avoid it.

But sometimes you can’t. When Fearless Fred dropped a pile of his Big Sexy Comics in my lap and asked for an honest review it was impossible to turn him down. This year, taking a cue from Fred, Bizarre Comics writer Kris Johnson thrust a bunch of comics into my hand and asked me to read them and tell him what I thought.

Once again, an offer that’s hard to turn down.

Bizarre Comics lead by Kris Johnson (writer, editor, letterer) and Rich “The Dick” Robbins is a company that specializes in humor with a number of titles available in physical and digital forms as well as a few ongoing web comics. Their main theme is humor which can be a tough road to go when you’re dealing in print comics.  To be fair it’s a road they hold very well. In terms of actual production values of the print comics I was given, I was rather surprised. Good clean paper quality. Solid colors and full color covers, they are some of the best I’ve seen out an indy comic. 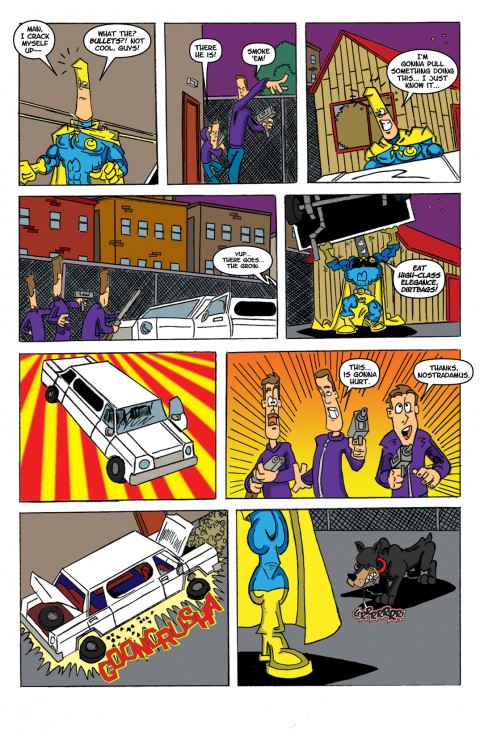 Private Dick is the story of Happyman a super hero from the future sent back to help stop the mysterious machinations of The Omega. The world that Happyman is teleported into is filled with similar heroes like himself.  Very much in line with The Tick and to a certain extent, Darkwing Duck, Private Dick has a good combination of over the top gags and a bit of subtlety here and there. That’s not to say the humor is for everyone.  There are quite a few jokes that many people might find a little offensive. I’m pretty hard to offend however so I tended to laugh out loud on a few occasions.  Robbins animation style of art works perfectly for the this books and once again the crisp colors and good paper stock help make the art stand out just that little bit more. The only two complaints I have are the following. Occasionally the writing is very dialogue heavy, especially in issue one.  The creators should learn to trust the art to push forward some of the jokes more than they have been.  Even then, this complaint might be moot as I did notice a difference in regards to this with issue 2. I’d also like to see the sillier nature of the heroes played up a bit more but once again I think this is an issue that will be addressed as the book evolves. 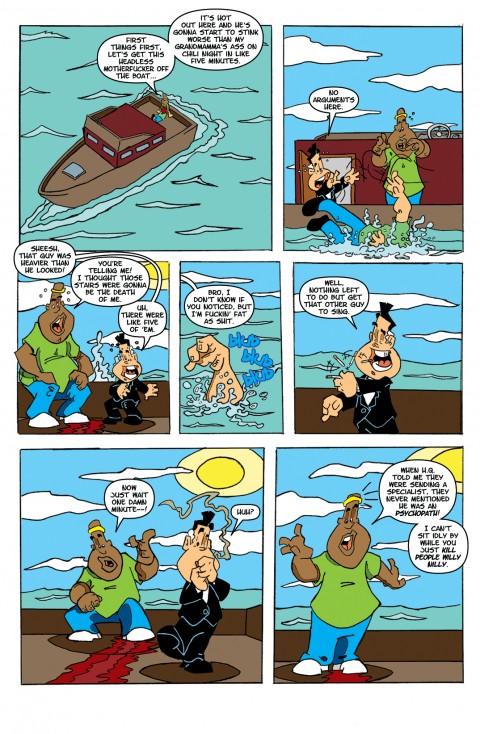 Parody is hard.  Do it right you get Airplane, Naked Gun and Black Dynamite.  Do it wrong you get Disaster Movie and Meet The Spartans. I always have a slight moment of fear when reading a parody but apparently I got lucky with this one. Spy Guy is a little more blatant and a little cruder with is jokes but on a whole, the book is done well.  A take on many of the old school Bond tropes, Thundernuts does pretty much what it sets out to do. A done in one comic, I love a few of the scenes where Obama is hiding from his wife that he’s still smoking. Of the sidekick who realizes just what a psychopath he’s working for. If you’re interested in the Bizarre Comics feel, this is a great opener as it’s one comic that helps tell the reader what they should expect from the rest of the line. 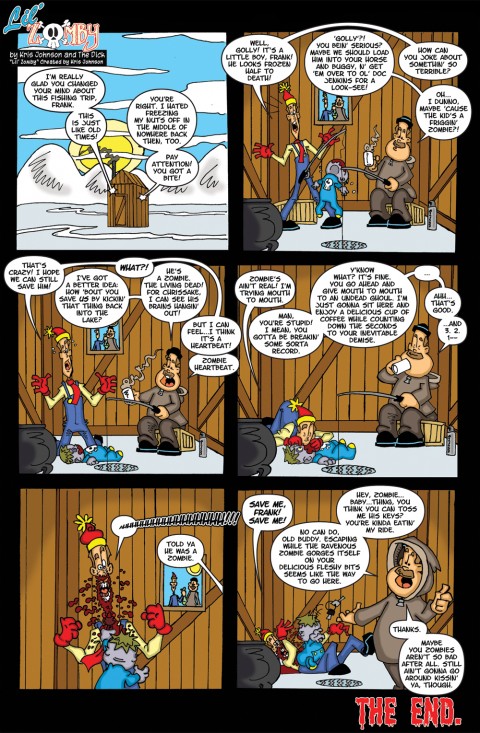 My favorite of all the material Bizarre sent to me is their web comic Lil’ Zombie.  It’s essentially about a zombie that’s in a baby’s body. Out of all their work, this seems to best suit all the sensibilities of writer and artist, because of its format of one page strips, the jokes don’t get old because there’s not enough time for the joke to get old. And of course there’s the fact that the zombie is a baby, how awesome is that?

Bizarre Comics line of books isn’t for everyone. If you don’t laugh at the occasional fart joke then they aren’t for you but at the same time they are making it quite clear to the audience that this type of humor is what to expect from their books, there is no false advertising in regards to this.  At the same time though, I imagine their work is going to evolve a bit. I’m just curious into what.

If you want to check them out, you can find Bizarre Comics at their website as well as digitally.

And if you are an independent comic book creator who wants your book reviewed, please drop me a line. I’m always fair and I will read your stuff; just can’t promise to like it.