Having finished re-reading The Invisibles last week, and then having re-read the re-coloured Casanova put me in a strange mood. The two books are very much similar – not in tone, or execution – but in the fact that they’re both everything that the respective writers love/fear/influenced by/sexually attracted to/etc put down to paper.

While both of those comics have their issues, I realized that I want to see more of these types of comics. I’m not saying that I want more hi-concept sci-fi stories I just want more quasi-personal works from creators that tend to make their living scripting the adventures of our favourite caped crusaders.

I think this is my major issue with Geoff Johns.

Nothing about his works speak to me on a base level. I’ve never read anything by him that made me relate to him in any way shape or form. The closest may have been parts of his Flash run – specifically when he made Central City a stand-in for Detroit, but even that devolved into a hackneyed parody after a while. Johns’ writing is serviceable, there’s nothing about him that really makes me identify with him as anything but a fan of comic books from his youth. There’s no growth there. Being the safe keeper to comic book characters is a pretty thankless job. I get that. Hell, Johns has done an amazing job in that respect, I just think that it’s time to actually push yourself as a writer and give back to the medium that you obviously love.

There’s that wonderful statement by Warren Ellis as he was wrapping up his 12 issue run on Thunderbolts:

The more creators who only took on housepainting as a part-time gig, the healthier this medium would be.”

I guess I just want him to take a risk. I mean, it’s not like it could really hurt him at this point. Hell, even Bendis takes time away from writing the Marvel Universe to give us Scarlet and Powers. 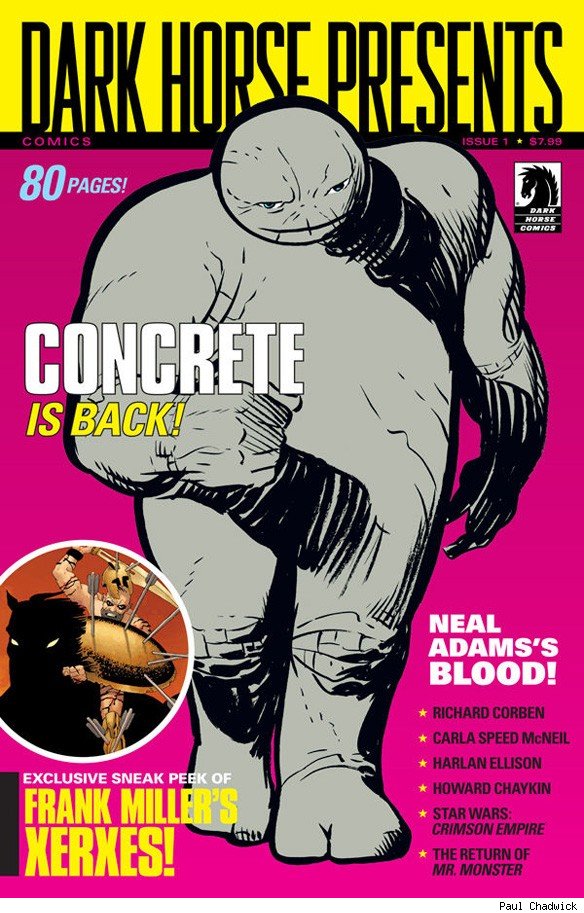 In case you weren’t aware the relaunch of ‘Dark Horse Presents’ comes out tomorrow. Check out this list of creators who are contributing: Howard Chaykin, Neal Adams, Richard Corben, Carla Speed McNeil and Frank Miller, who previews Xerxes, the long-awaited prequel to 300.

Yeah, that’s some huge talent right there, but for me the biggest name belongs to Paul Chadwick and the return of Concrete.

The hook of the series is that of the adventures smoothed down version of the Thing (Concrete is a liberal speechwriter’s brain transplanted by aliens into a concrete android body) who instead of trying to discover and explore pseudo-scientific worlds, chooses instead to travel Earth and do all the things that his new body allows him to do. Once you get past the whole alien abduction and indestructible body it’s really just the story about a timid, gentle and thoughtful man taking command of his life and doing everything he’s ever read about. Chadwick is known for his beautiful clear line style and photo realistic backgrounds which really helped sell me on the series when I personally suspected that it would devolve into horrible science fiction tropes.

Instead you get some of the best short stories this side of Adrian Tomine.

Really pumped for this, should be a pretty good week.