Summer Movies So Far And Other Ramblings

Howdy. I’m currently sitting on the couch as I write this.  I’m on vacation from the dreaded day job so I figured I’d take it easy. I’ve been running around visiting people, delving into my copy of the Walt Simonson upper body work out Thor hardcover (seriously, my girlfriend said I couldn’t put it anywhere the cats might knock it on to them for fear of their deaths via comic book). 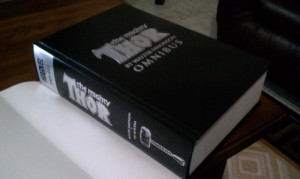 GF's first words when seeing the book "My, nice Bible you've got there."

More on that when I finish it.

Beyond my love of comics, I also have a love of film. I’m especially a big fan of action flicks. So between the love of comics and the love action films, it’s no wonder I look forward to the various comic book flicks of the summer season.  With that I thought I’d take a look at the films so far as well as some thoughts on the world of comics this week.

Loved it.  I thought this was as good as you could possibly expect. It was a good way of introducing Thor’s world to those who are already intrenched in the Avengers film continuity.  I loved the cameos, I rather liked the story, the direction was great, the only the only thing I thought stunk was the 3D.  As in, I paid for 3D and got very little for my extra bucks.  I had the same problem with The Green Hornet so ever other film this summer can blame these two films for not getting my extra 3D cash.

I’m not sure if I liked this more than Thor but I really liked First Class. The casting was incredibly well done and Michael Fassbender is more in line with the Magneto I had always imagined.  I rather like Ian McKellan but Magneto was always shown as a robust youthful sort of shape even as an old man.  Of course in the comics he’s been de-aged by various means a bunch of times… but back to the flick.  Continuity wise, First Class doesn’t make a huge amount of sense even in terms of the film series (if you were comparing it to comic book continuity… good luck to you) until I realized that Bryan Singer produced it.  They applied the same method Singer used on Superman Returns; anything other than the first two films doesn’t count.

I’m not a huge Green Lantern fan by any stretch of the imagination but the second batch of trailers convinced me to check it out.

Well that and the woman likes Ryan Reynolds.

So we went and saw it at the drive in with the second feature of The Hangover 2 (which sucked by the way) so no worries of the 3D over tax on this flick.

Over all, I enjoyed it.  It was very much an origin film and suffered from many of the problems that origin films have but I did enjoy it. Except the end. I’m not going to spoil it but it really felt like a scene was missing when Hal asks for the Guardian’s help to save his plane. But DC did one thing right that I’m amazed Marvel or DC hadn’t done it before.

After the credits were over, there was an ad for Green Lantern comic books.

How simple an idea! It was like DC was saying “Hey kids! Like Green Lantern but don’t want to wait two years for more adventures? Read THESE!”

I really hope they continue with this idea and that Marvel and the other comic book companies pick up on this. Dark Horse, for instance, doesn’t have a lot of films in the works but wouldn’t it be great for them to have that title card show up at the end of the film? It be a great way for these smaller companies to get a little more press for their buck.

Now, apparently this under performed at the box office opening weekend it did do well enough for a sequel.  Remember, Batman Begins did do well but The Dark Knight hit it out of the park.

Powers Pilot Gets A Cast

I used to really love powers but I lost interest the minute the main characters became super powered. But I rather like the idea of this as a TV show, especially if it’s NYPD Blue with super powered suspects. Jason Patric as Walker is not my first choice but he is a great actor that could do the part justice.

Yup, apparently Ultimate Peter Parker is dead and we have a new Ultimate Spidey on the way.  I’ve read a couple of interviews with Bendis where he mentions that the idea is Parker’s death inspires a new Spider-Man to take the job.  It’s an interesting idea and twist. Ultimate Spider-Man has been the only consistent Ultimate book in terms of quality since the line launched.  Must admit, I’m curious to see where this goes. As to who the new Spidey is, my first guess is Ultimate Moon Knight.  If that’s not correct, it’s probably a woman.

It’s been a while since a New Avengers’ story arc held any interest for me but I must admit a pre-Avengers Avengers with Howard Chaykin on art duties has grabbed me. I will have to check out the trade. I recently re-read American Flagg and it’s still as a terrific read.

Bleeding Cool showed off the promo box they got in conjunction with the release of the new film. Hey Hasbro! Where’s my box? I review movies too! (pouts) 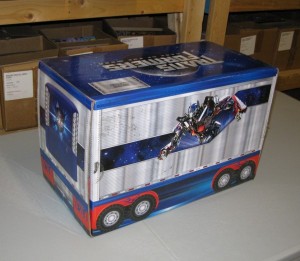 This was filled with swag. I love swag. Where's my swag?

And now something completely not comic booky but I have to share.  I just learned Nirvana’s Nevermind turns 20 this year.

Until next week, keep your chins up.

Just A Thought: Brent Talks Rocketeer and The BTAS Bible