There are two things you have to know before delving into the rest of the article.

The first is that I am not the world’s biggest Alan Moore fan.

While I love many of his comics, his attack on current comic book creators a while back was rather mean-spirited and I dare say, uninformed.  My stance on his problems with Watchmen and the prequel series are pretty well-known to readers at this point. So when you read the review, I’m sure you can guess, that just because Alan Moore writes it, doesn’t mean I’ll like or dislike it.

The second thing you should know is that in discussing the latest installment of LoEG, I have to go back a ways. And with that, there are going to be some significant spoilers.

So on the off-chance the title of this column didn’t make it clear enough, there are spoilers ahead. I will try to avoid the huge reveals but there are going to be some moments in this column that will spoil certain aspects of the story.

Turn back now or it’s your own fault. 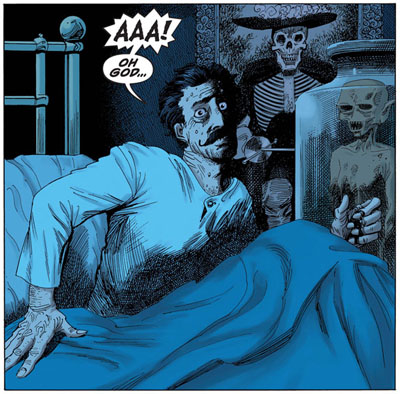 Wednesday brought about the release of the third chapter in The League of Extraordinary Gentleman Century series, 2009, a three issue book that began with 1910 (published in 2009), 1969 (in 2011) and now 2009. It was a book that I had been waiting for more in curiosity then expectation. I really enjoyed 1910: I thought the elements brought in from Three Penny Opera were incredibly inspired especially. Upon my first reading, 1969 came off a bit flat and I was a little confused.  Knowing this, as soon as I got home with 2009, I dug out the previous two volumes, sat down and read the entire epic in one sitting. 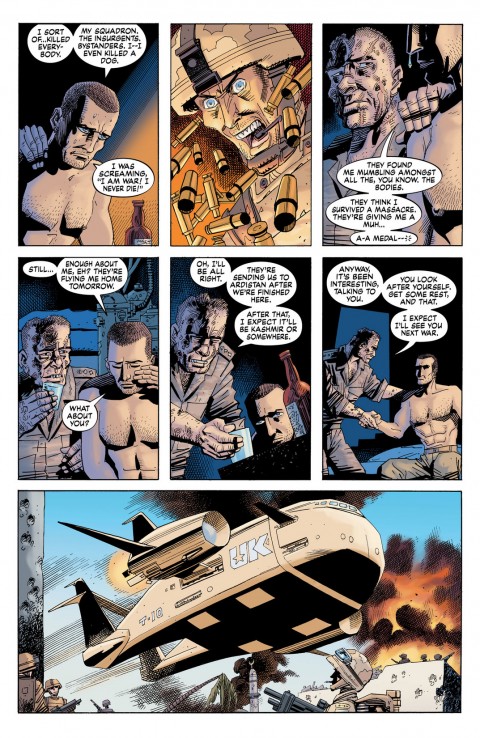 You have to work at it a little but over all, The League of Extraordinary Gentleman: Century is a fantastic graphic novel. There is nothing else out there quite like is and despite my discord with Mr. Moore’s views on comics and how they have treated him, Moore has proven with out a shadow of a doubt that he is still a writer to be studied and enjoyed. Kevin O’Neill has churned out an astonishing amount of beautiful pages in this series.  There is not a dud in the bunch.

But as I said, it’s a piece that does take a little bit of work on the side of the reader.

The first two League series are excellent but fairly straightforward. Series one sees the League form in attempt to thwart an attack on England. The second series finds the League facing off against H.G. Wells’ Martians as well as the dissolution of the League itself. Essentially what these series boil down to is a very well written, high concept, action series. A majority of the characters are well know to the reader through books or film and while there is a ton of little Easter Eggs hidden in the series; it’s rather straightforward and easy to get into.

Then came The Black Dossier. 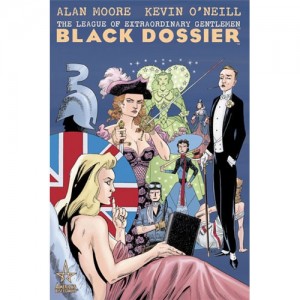 Not exactly a graphic novel as it is a source book for the League (and a loving tribute to the British annual comics), The Black Dossier is filled with characters and concepts that hadn’t been in the League before. The Blazing World for instance as well as a bunch of copyrighted characters with names changed an appearances slightly altered so lawsuits can be negated.  Emma Peel and James Bond are both heavily involved in The Black Dossier but under the names Jimmy and Emma Night (a play on her maiden name in the Avengers TV series). The book itself is very interesting as it gives you a ton of reference on previous leagues and introduces Orlando, a new character for the series taken from the novel by Virginia Wolfe. Overall, The Black Dossier is very ambitious and very British. The other revelation we get is that it’s not just British and Victorian era literature that is connected in this universe but the fact that all of fiction might be involved.

And without it, it makes Century pretty hard to read.

While as I said, The Black Dossier isn’t directly connected to Century, it does fill in a lot of gaps for readers. It also prepares the reader mentally for what they will have to go through while reading Century.

When broken down to brass tacks, Century is the story of The League trying to stop the coming of the Anti-Christ from coming about.

That’s the very, very, basic version of the story Century sets out to tell. 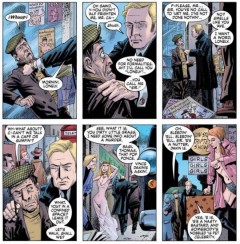 The more complicated version involves everyone from Mack the Knife to Michael Caine’s Carter to both Roger Moore and Daniel Craig James Bonds (which is explained in a great way). Century is dense and while I imagine that it was due to this denseness that the bo0k was released in three pieces, I think it might have been a mistake as it works much better as a solid read. If I hadn’t re-read the other installments, I would have been completely lost.

Now, I’ve mentioned a few times that Century is a book that takes a little bit of work to read and I want to make it clear that I mean work as opposed to you have to be really smart.

While some of the concepts are a bit on the high side and some of the characters are a bit obscure, I must credit Moore for not talking down to the reader. Moore believes (or at least seems to believe) that the reader is at least as smart as he is and the tone never drops to the level of “why don’t you play with this red ball”. He does give you a good chunk of hints to obscure identities and at least enough that if you’re interested, you having a starting point to find out more about them.

2009 ramps up the action as we find out the Anti-Christ has been born Orlando and is desperately trying to find Mina Harker and Alan Quartermain to try and get rid of it. There is a lot of modern book, television elements at work here. We see that the President in Fox’s 24 TV series was elected after the end of the presidency of The West Wing. And then there is the Anti-Christ himself.

Other websites and even a newspaper have revealed who the evil child is and Bleeding Cool has disputed this fact, either way it skirts copyright very closely. So much so, that I’m surprised there isn’t a lawsuit already pending.

What no one has really mentioned is (Bleeding Cool has hinted at it) is who stops the Anti-Christ.

Remember how I mentioned all of fiction might be part of this universe?

Over all, if you are looking for an ambitious read with great art, The League of Extraordinary Gentleman: Century is fantastic and worth looking at.

But I might want to pick up The Black Dossier and read it all in a short space of time.