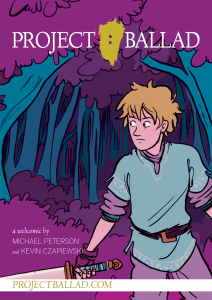 I’m not sure Project is the right term for this comic. I think Enterprise Ballad might be more fitting because this seems like something big. Really big. So big that in everything so far presented I can’t even begin to get a handle on just what this project is about. 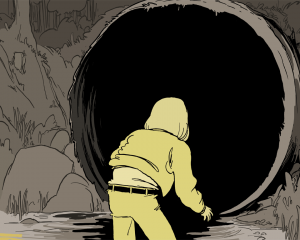 Or at least I couldn’t until I read the About page and some of the blog entries. Which leaves me challenged. I have what’s presented so far, and I have notes and summaries and ideas of what’s really going on and where the story is going. But until it can really get all that going, what is there now is a bunch of little bits that don’t present a really clear idea of what Project Ballad is. 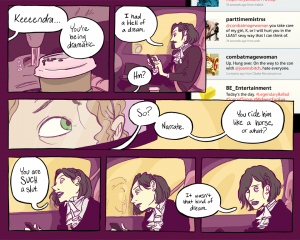 Except, that it looks like it could be really good. There are some neat uses of story within a story. There are multiple narratives in our own world and what looks like a fantasy world that might or might not exist in the virtual world. And there are some neat characters and locations and dribbles of plot and ughh! I think maybe what I really want is to have it all now. Because when you do read the supporting stuff,

Project: Ballad is a story of creators, creations, and audiences; of reality and fantasy, of comics and games, of who we are, and of what we really want.

it sounds really interesting. This is one of those webcomics that’s not REALLY a webcomic, but an online serialized graphic novel. What’s the difference? It’s really meant  to be read as a book and not in small installments.  Which is frustrating, but maybe because we are not used to it yet. I wonder how Dickens contemporaries found reading his stuff in little bits. 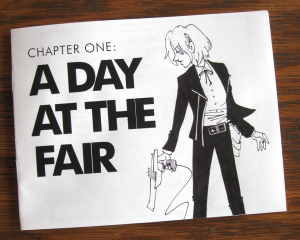 So okay, long rant over, what’s this Project Ballad all about anyway? 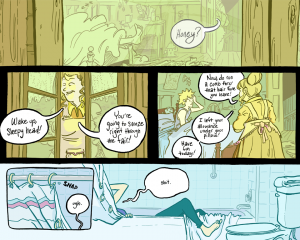 It’s centered on Kendra Price who is entering a cosplay contest to win a sneak peek at the final installment of a hugely popular JRPG (Scottie say: Japanese Role Playing Game). It’s also apparently the story of the world IN that JRPG. And lots of other stuff. See above. 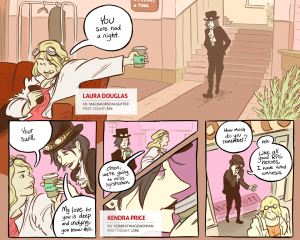 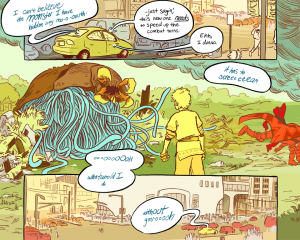 Cinematic. Layered. Visually diverse. The colours are amazing. The characters are unique and the line work is loose but skilled.  It reminds me of Posy Simmonds if the saturation was pumped way up. And the use of multimedia things like paste in’s of phone screens or mini-comics are really neat. Writer Michael Peterson and artist Kevin Czapiewski have got something really promising going. 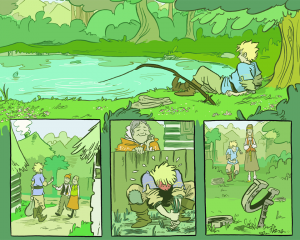 Project Ballad is a comic I want to buy a few years from now in a really nice hardcover either through a Kickstarter or at TCAF where I picked up the postcard from. Or hey, maybe some publisher will take note of it and I’ll be buying it a my local bookstore. I think it has that potential. But right now it’s all about that potential.