Alastair Stirling, roboticist and AI inventor wakes up. Which is amazing considering he died sixteen years earlier.  Al dreams of more for robots, how advanced, how life-like they can be. Then he wakes to find he is one. What’s more, he’s become one of the greatest examples of his own work. 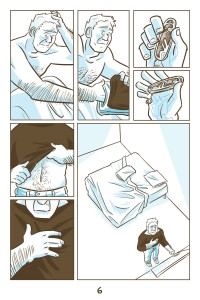 Al is taken to his “home” where he is reunited with Brendan Pinsky his former intern and colleague. Brendan is now CEO of Sterling Inc. the leading AI company. Brendan has continued and built upon Alastair’s work and turned Stirling Inc. into a leading company. 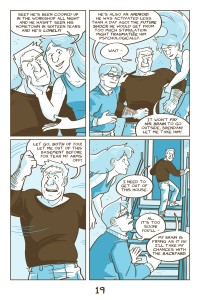 Brendan has been working on something else. A robotic copy of Al. Except he couldn’t do it, and instead created Sulla. The student has become the master. Based upon Al, but female and with the ability to float. They’ve become a sort of father, daughter pair. 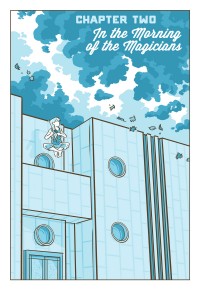 And now Al has returned, and the past has come back, full of memories, both happy and painful. What would you do if you had that technology? Would you not try to bring back someone important to you that you have lost? But what are the costs? And what sort of future do Al, Brendan and Sulla have, given Al and Brendan’s past? Because there is a lot more to their relationship than just mentorship. 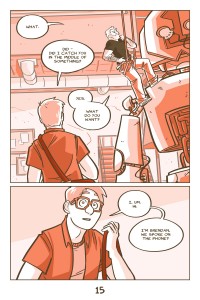 Visually, O Human Star is very professionally done. The art is clean, with a hint of older Japanese stylings. The designs are strong and the characters warm and inviting. The colour work is largely monochromatic, with blues for the present and red for the regular flashbacks. A great way to easily differentiate between the two time frames. When another colour does enter into the palette, it is striking and powerful. The blood in the first few pages leaps out. 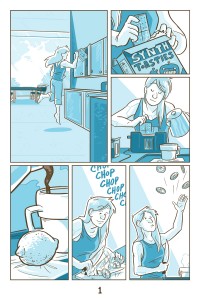 The lettering, both dialogue and for effects is clean and clear, with none of the spacing or placement issues that can plague webcomics. 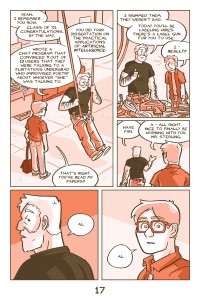 One note should be made that there are some NSFW elements so O Human Star should be considered best suited to an older reader. 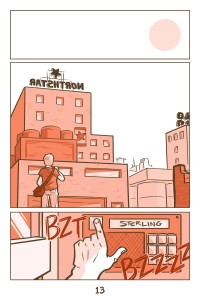 Blue Delliquanti has a lot of other comic material as well, worth having a look at. OHS looks to be in for a long story, having just started Chapter 3 and not really started into any sort of major plot line. Unless the story is focused solely on the two time periods and Al’s coming to term’s with his new “life” there is likely more to be revealed.

Having read through OHS to date, I wish now I’d grabbed more from Blue at TCAF this year than just a business card. Luckily OHS chapter’s 1 & 2 are for sale through her store.