Take journal comic and toss liberally with the absurd. Wrap it up in an animator side project box and you’ve got Shrub Monkeys.

The exploits of Katie Shanahan and her two younger siblings are presented weekly in a loose, strip comic format. It’s a sort of real life meets silly/crazy imagination stuff that delivers the punchline. Katie works in animation, (and it shows) her brother Shaggy writes and youngest sibling Hes is there for the cute.

The comic is a sideline, done for fun, so don’t expect finely crafted, well honed material. This is the animators hobby art. But here’s the thing. When your day job is a chef, or concert pianist, the food you cook for fun or the music you play off stage is STILL gonna be pretty fine. But it will be relaxed, playful, open to experiments and above all, done for the joy of it.

And the great thing about comics done by animators? They are animators! They can draw. They make their living breathing life and character into lines on paper. 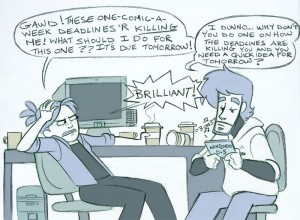 Some strips are more polished than others, some more quick scribbles, others cleaned up, inked and monochromatic colours added.

The other great thing about animators are the characters and expressions. Katie is great at subtle and bold moments.

Katie and her brother Steven (Shaggy) garnered a lot of accolades last year with the short comic Silly Kingdom including two Joe Shuster Award nominations. She has also contributed to Womanthology, Flight and the Anthology project. Expect to see a lot more of Katie’s work in the coming years.