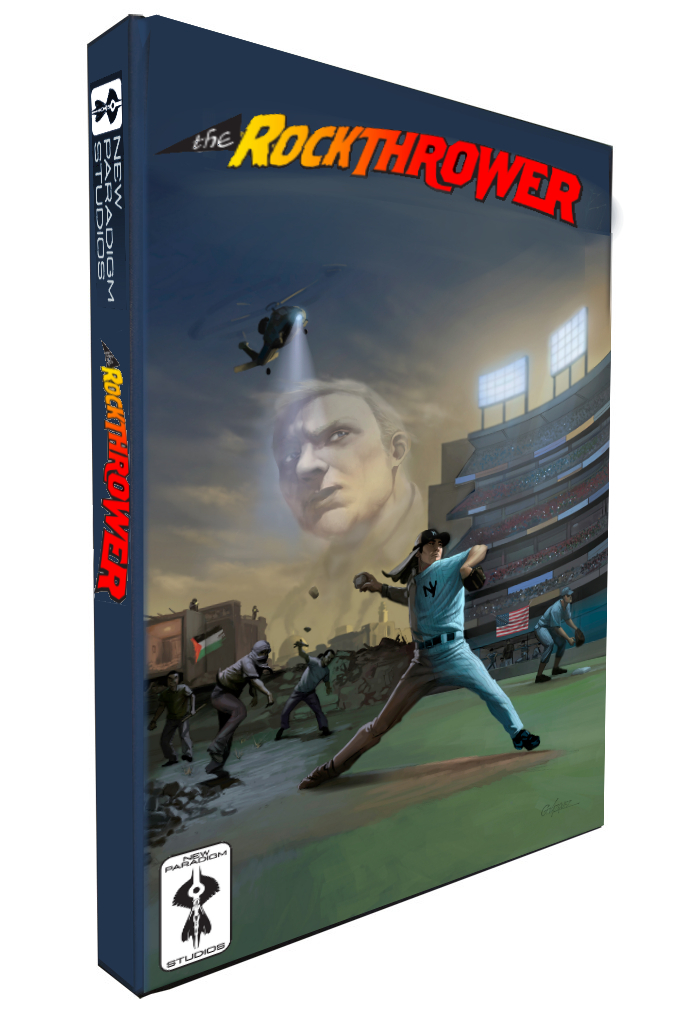 Crowdfunding platforms provide the unique opportunity for creators to connect with comic book fans, bringing them together into one place to celebrate new ideas. Many of the campaigns I’ve come across are fairly straight-forward, yet this week’s featured campaign takes crowdfunding and the concept of fan-driven comics to another plateau, allowing fans to choose the Kickstarter special edition cover for The Rock Thrower, a baseball-centric graphic novel that brings two men of different cultural backgrounds together, bonded by an honest love for the game they cherish.

Published by New Paradigm Studios, The Rock Thrower is a comic book created by Karl Bollers, Dave Ross and Gene DeCicco. The story follows former Major League baseball pitching ace David Willis, once loved by fans, who now toils away in the front office all but forgotten. While watching a newscast featuring the Israeli-Palestinian conflict in Middle East, he spies a young Palestinian boy hurling rocks at an Israeli soldier with speed and accuracy surpassing the skills of even the most talented of Major League pitchers. On a hunch Willis travels to the teenager’s homeland in an attempt recruit him, only for him to discover Willis’ own Jewish heritage. Combined with his status as a disgraced player, the count is against Willis, who looks turn his, the boy’s and his team’s fortunes around.

This effort began as a means to secure stretch-run funding for the graphic novel, which itself according to the creators is 65 percent completed. The campaign has already raised over $2300, but with only four days remaining the project needs some added support from comic book fans.

You have two options if you’d like to contribute to this campaign. For $3 you can get a digital edition of the first issue of the comic, while you can outright get the entire series digitally for $10. Print editions are then available thereafter at $20, additionally including Kickstarter exclusive variant covers drawn by Bill Sienkiewicz and a digital subscription.

With a $40 donation the creators are offering the $20 reward in combination with a limited edition “Rockthrower” t-shirt that will only otherwise be available at conventions. They up the ante at the $60 plateau by adding a customized baseball card imagined after yourself in a baseball uniform from the comic series. Finally, if you’re a fan of hardcover editions, at the $75 level you’ll receive everything from the $40 level, only as a special hardcover edition of The Rockthrower. From $85 onward, commission packs, special baseball sporting packs, guest appearances are all available, with the big prizes being exclusive Bill Sienkiewicz original character art packages.

Sports are funny, they have this capability to bring us together as a pseudo-universal truth whereby we–for that time our teams play– consciously and subconsciously cast aside our differences and celebrate our teams and our sports. This is such a story, albeit with much far reaching implications. A friend of mine, Dino Caruso, used sports as a similar metaphor in Against the Wall. In the case of The Rockthrower, we find a Jewish man actively seeking out a Palestinian youth he watched throwing rocks at ludicrous speeds on television. He travels to the Middle East, only for the youth to discover Willis’ Jewish background.

So why support the project? This is a story bringing two historically opposing, polarized cultures together, ones that have been warring for thousands of years in violent, bloody and very hostile conflict. This comic attempts to defuse that hostility with something as simple as baseball.  Because in the end, we’re just people with shared passions.