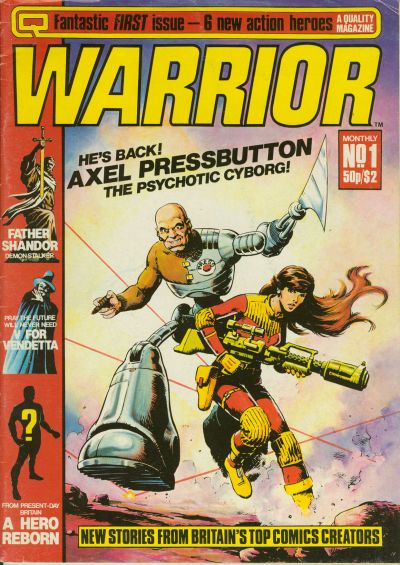 Undervalued Spotlight readers often send me emails with recommendations for future Undervalued Spotlight picks. Some I’m choosing to hold back on (we’re not ready for the 3rd appearance of Deadpool just yet) while others impress me so much that I want them to get posted ASAP.

I’ll throw things over to Darren…

… Hi Walt, I have a suggestion for a post if you don’t mind…

Warrior was a black and white British comic anthology from Quality Communications, in the same vein as 2000 A.D. and Heavy Metal. Issue #1 contains two important firsts for Alan Moore and comic fans: the first V for Vendetta and Alan’s Moore’s reinvention of Marvelman (later renamed to Miracleman). In other words, this is 2 big birds with one stone

Some facts about Warrior:

Both properties would live on… In August 1985, Eclipse began reprinting the Marvelman stories from Warrior, coloured, and re-sized. They were renamed and re-lettered throughout as Miracleman due to a trademark infringement claim from Marvel Comics. Issue 7 began with all-new Miracleman stories from Moore and new artist Chuck Beckum. In 1988, DC followed suit, and reprinted and recolored the material in V for Vendetta 1 through 7, with new material beginning in issue 8, retaining David Lloyd as artist, and completing the tale in issue 10.

Funny, Warrior Magazine isn’t listed in Overstreet at all. Copies in VF/NM can be acquired for around $150… seems very undervalued for the significance of the book.

Very tricky to find, especially in NM grades. How could this book be so off the radar of collectors?

One downside to this book is it’s too big to send to CGC to slab it (bigger than a regular magazine), about 8.5 x 11.5 inches, the book won’t fit in the shell. To protect it you’ll need to get special sized bags and boards. All the more reason why high grade copies are so scarce.

One other thing of note, there is a sweet advertisement on the back for London comic shop “Forbidden Planet”, illustrated by virtuoso artist Brian Bolland. Lots of great “British invasion” talent running through this title.

Warrior #1 is not listed in Overstreet Price Guide.

Strengths that make this comic book (magazine) a good long-term investment are:

Thanks Darren that was a great pick.