I have been collecting comics since I was 10. In Tales from The Comicdenn I am going to share some of the interesting adventures I have had in this great hobby and hopefully a few nuggets of wisdom as it pertains to collecting, along the way. Welcome to my first post and please feel free to contact me. Hopefully we can have an interesting interaction! 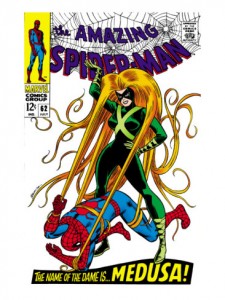 In 1967 I was 10 years old. I had a grade 5 teacher who read Tarzan of the Apes to the class, a chapter a day, every afternoon. I was captivated by the world of Edgar Rice Burroughs, which led to Jules Verne and on one Saturday morning while flicking the channels I discovered The Fantastic Four, Jonny Quest and The Amazing Spider-Man! That was it for me. I started asking anyone who would listen to me  if they had any comic books, and lo and behold I discovered continuity and …..back issues!!

I didn’t know it at the time ,but I was smack dab in the middle of the Silver Age of Comics. The first Spider-man I bought off the stands was issue #62″The Name of the Dame is …Medusa” and Fantastic Four #76 ,”Stranded in Sub Atomica”. By this time I had garnered ASM#56 and FF# 56 as well as a couple of Tales of Suspense and Tales to Astonish, if I remember correctly. This was the time when the explosion in titles happened at Marvel. New titles for Iron-Man, Sub-Mariner, Nick Fury, The Hulk, Dr.Strange and The Silver Surfer were right around the corner.

I was mesmerized by the different styles these artists named Kirby, Romita, Buscema and Colan had. I also did my best to learn how to draw these amazing characters. And thus began my love of sequential art storytelling! My comics to me were an entryway into a world where my imagination could run wild. Where I learned about alliteration, and 10 dollar words that Stan Lee threw around as if it was the way you were supposed to talk.

All this because a Grade 5 teacher loved to share the gift of reading with her class. Thanks Mrs. Nethercott!

It wasn’t long before I sent away for a back issue list from Robert Bell, in New York as well as a couple other early dealers. That will be a story for next time!