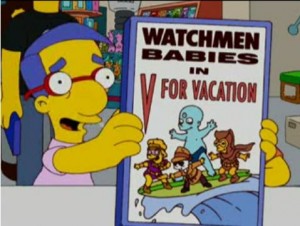 In his recent interview with Mania.com Alan Moore talks a bit about DC’s Blackest Night.

Alan Moore: That’s it. It’s the paucity of imagination. I was noticing that DC seems to have based one of its latest crossovers [Blackest Night] in Green Lantern based on a couple of eight-page stories that I did 25 or 30 years ago. I would have thought that would seem kind of desperate and humiliating, When I have said in interviews that it doesn’t look like the American comic book industry has had an idea of its own in the past 20 or 30 years, I was just being mean. I didn’t expect the companies concerned to more or less say, “Yeah, he’s right. Let’s see if we can find another one of his stories from 30 years ago to turn into some spectacular saga.” It’s tragic. The comics that I read as a kid that inspired me were full of ideas. They didn’t need some upstart from England to come over there and tell them how to do comics. They’d got plenty of ideas of their own. But these days, I increasingly get a sense of the comics industry going through my trashcan like raccoons in the dead of the night.

Alan Moore: That’s a good image, isn’t it? They weren’t even particularly good ideas. For Christ’s sake, get some of your own ideas! It’s not that difficult. You used to be able to have them! I’ve also heard that, apparently, a fifth of the direct sales market in comics is my work—twenty percent! I’d imagine that the sales in places like Borders and the big book shops, which are increasingly where the bulk of the market is, it’s probably a higher percentage.

Alan Moore is never at a loss for words when it comes to his disgust at DC Comics and it’s always interesting to hear whenever he does so. The man is eloquent and one of the greatest creators in pretty much any medium and while it is interesting to note that he is angry at DC for taking some of his older ideas from back in the 80s – this is still the guy who released graphic novels that feature literary characters engaging all sorts of adventures – League of Extraordinary Gentlemen and Lost Girls

This, of course, could also be a different viewpoint on continuity. It seems like DC comics exists right now in a weird space that all continuity needs to be addressed. I’m not a fan of Geoff John’s Blackest Night series – it just sort of feels like it’s something that should’ve happened four or five years ago – the concept of zombie superheroes is something that we’ve seen done – in fact the whole series thus far seems to be stuff we’ve already read – is it because we’ve been told – through continuity – that this event will happen

So I suppose my question is should we take all continuity as gospel?  Does following continuity become a minor form of plagiarism or – even worse – fan fiction?