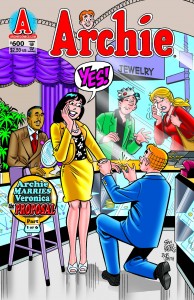 For those who haven’t been living under a rock for the past couple months, you may have noticed the six issue story arc in Archie where Archie finally ties the knot with Veronica. When the story was first announced it caused a sensation and made newspapers headlines all around the world, including some sensationalist news, like with the man who sold his copy of Archie #1, proclaiming his preference for Betty. But readers of the series will find that while the arc was promoted as being six issues, it turns out that the marriage to Veronica story only lasts for three of them! The last three issues provide the other half of the equation–Archie ends up marrying Betty!

It’s a smart business decision by the people at Archie Comics for sure. They received a massive amount of media exposure by making it seem as if the marriage to Veronica was the be all/end all of Archiedom, an impact which I am sure would have been lessened if they revealed earlier that Archie would also be marrying Betty later on. And now they can make it up to all the Betty fans who felt slighted when he chose Veronica.

Another thing that Archie fans will notice is that the art style noticeably shifts away from the DeCarlo house style during the “wedding” sequences, as if to emphasize the weddings are dream sequences and not part of Archie canon.

As for the story itself, it’s an Archie fan’s dream seeing the lives of Archie and Veronica play out as they have children together. But in the last issue, Veronica asks a significant question; does Archie think money is the root of all of their happiness? It’s a pretty significant part of their lives for sure, as their entire living seems to stem from the generosity of Veronica’s father, who gives Archie a high level executive position in the company. Whether or not Archie and Betty will be just as happy living together will be seen in the first week of December when the proposal to Betty happens.