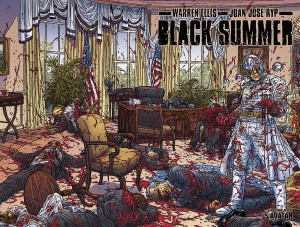 Warren Ellis comics can basically be summed up with the word ‘awesome‘ – they’re always thought provoking, with some sort of quasi fantastical in the real world setting, showcase some sort of fringe science and have characters who talk about how bad the coffee is. I’m sure that should Warren Ellis ever pass away it won’t be long before a computer program shows up to write Ellis-ian comics for the masses. (Just think what DC and Marvel would do to get their hands on that!)

Either way the Avatar series by Warren Ellis and Juan Jose Ryp,has been optioned as a movie by new operation Vigilante Entertainment from Hicham Benkirane, the former head of audiovisual development at Les Humanoides. The screenplay is to be written by Ryne Pearson to adapt.

Variety describes the comic as about

superhero team the Seven Guns, a group of scientist-adventurers who modified their own bodies for street-fighting in order to take back their West Coast city from a corrupt police force, criminal local government and rapacious private security forces.

the superhero that executed the President of the United States on charges of war crimes. And the state that then turns against and hunts down the entire superhero team as a result. It’s very much a post-9/11, post-Iraq Invasion comic, and an extreme one at that.

Will this aspect stay in any resultant movie? After all it would be the easiest way to get headlines, if that’s what you wanted.