I’m sure you’ve seen by know all of the Captain America motorbike chase scenes courtesy of the daily mail that have been making the rounds the internet lately. And I gotta say, they look pretty good. 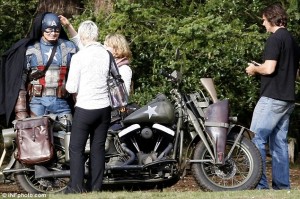 All of the Cap gear looks pretty good, pretty much like the version that we saw in Millar and Hitches Ultimates, though I wish they went with a darker shade of blue since the dust covered baby blue looks a bit weird. That also reminds me, was the original Cap comic in the outfight made of scale mail or something? What kind of army outfit has scales on it! 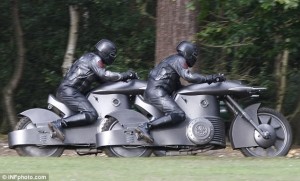 Check out those spokes! It’s Hydra, baby! Which is kind of odd, as I don’t remember the Red Skull having Hydra dealings in WW2 in the comics. Their comic involvement with him was that they revived him in the modern times when he was placed in suspended animation. So if they follow that plotline, I am going to guess that maybe half of the movie takes place during ww2 and the other half is in the modern time where they bring back the Red Skull. On the other hand if they do that, they won’t be able to end the film with Cap going into the ice which would be a cool movie moment. 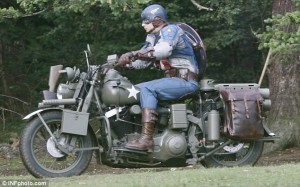 Whoo look at Cap go on his cap-bike! Give us your thoughts on what you think of the Cap look!