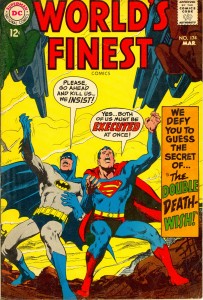 The Cover: Well, it looks like Batman and Superman are begging to be killed because they have some kind of super-secret plan to escape their situation or they have realized that they are in love with each other and since the world won’t accept them, they have decided to enter a double suicide pact out of love….I am not sure which would be better.

The story: Our tale of suicide kicks off with Clark Kent riding the elevator at the Daily Planet when he is suddenly struck with a mental blast that projects an image of Batman being crushed by a giant rock while a voice in his head sends him a bunch of co-ordinates that will lead him to Batman. Instead of wondering why this is happening or who is projecting this stuff or even plain old questioning it, Clark leaps up and runs off to save Batman while the co-workers in the elevator with him consider him a weak kneed creep. Meanwhile, we cut to Batman who apparently isn’t being crushed to death by rocks, but is sending Robin off on a schooltrip when he gets the same kind of psychic vision as Superman has and decides to speed off to save him. Ok, at this point Batman and Superman are both in the Justice League, would it kill them to make a phone call or leave a message to warn the other members of the league about what’s going on? But no, for the sake of the story, we gotta let these guys ignore common sense.

Superman arrives at the co-ordinates given to him where he finds a giant lead-lined citadel. Using this uncanny ability to leap into situations that probably are traps, Superman enters only to find the indestructible door slams shut behind him and he is forced into a maze of hallways. Cut over to a pair of hidden people inside the citadel who declare that it’s time to activate their defenses and unleash their chamber of ordeals on Superman which results in…a bunch of holograms of Superman’s villains laughing at him really loudly. Yes, the man who can push planets out of orbits is supersensitive as he can’t seem to withstand other people laughing at him as the laughter is driving him insane. As the mysterious duo of attackers stop the laughter, they turn their attention to Batman who has just arrived to save Superman.

Batman cautiously enters the fortress to find a chair that is pretty obviously a trap to the readers and slowly approaches it only to have the chair come to life, grab him, hover into the air and spin around in circles while hundreds of bats swarm and screech really loudly into his ear knocking him unconscious. Jeebus, so far the Dark Knight and the Man of Steel have been getting their asses kicked by laughters, bats and a chair? Once Batman has been knocked unconscious by the screeching bats, the two shadowy figures seal Superman into a Kryptonite room causing him to scream in terrible pain which wakes up Batman who is magically free from the chair that was holding him. Bats races over to Supes when the mysterious two opens the door leading to Superman where the two reunite and compare stories when all of a sudden two pairs of shadowy figures approach and start blasting them with guns and ray beams.

All of a sudden, the 4 new attacks are revealed to be Martha Wayne, Thomas Wayne, Lara El and Jor El! Blasting at their children, they force them to dive for cover and fall into a trapdoor that leads into a room where they are blasted with force and kryptonite beams until they collapse. At this point the two shadowy figures that started this whole plan decide it is time to begin interrogating Batman and Superman through the use of torture! They start shooting them again while asking questions like what are their secret identities, locations of their bases and secret nuclear missle installations. Bunch of wusses, can’t even take a little torture! So while they are babbling the information, the wall explodes revealing the identities of the two figures who step out to Superman and Batman. As realization dawns upon Superman and Batman who their attacks are, they start begging to be killed and they are obliged as the two figures blast them with ray beams and then…are revealed to be Batman and Superman! Wait, what? Flashback to last week when a scientist invited Superman and Batman to his house and gave them a gift of Superman and Batman robot duplicates that are perfect duplicates of them even to the point of believing that they really are Superman and Batman, with the Superman duplicate even being weakened by Kryptonite! Hang on, why would a scientist build kryptonite weakness into a robot that he was going to gift to Superman? So anyways, they decide they need to subject the robots to tests before they use them and they built a giant maze and torture castle for the sole purpose of testing the robots out. When the duo stepped out from the exploding wall, the robots somehow realized that they are robots that failed to do their duty and needed to be killed. And then our tale ends with Superman scoffing and claiming that he will use his own robots when he needs a double. Wait…if the scientist is the one who made and programmed the robots…and they knew that they were Bruce Wayne and Clark Kent respectively, wouldn’t that mean the scientist also know their secret identities?

The Score: 8/10: The scene in the cover does happen in the book even if they were robots of Superman and Batman that were begging to be killed. But what stopped this book from getting a 9 is that it was just so god awful, I couldn’t even find anything to make fun of aside from how boring it is! So I took a point away for causing me pain by reading it.