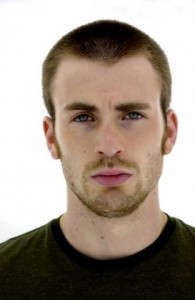 Chris Evans may be donning the red white and blue to play Steve Rogers in next year’s Captain America: The First Avenger, but this isn’t Evan’s first foray into the comic book genre.  In fact, it isn’t his second or third, either.   Sure, actors like Ryan Reynolds have crossed between Marvel and DC franchises, but Evans has dipped his toe into many many different comic book ponds. Don’t believe me? Let’s take a look at his filmography, shall we?

Fantastic Four (2005): Chris Evans first blipped onto my radar as the hot-headed Johnny Storm.  In a movie filled with questionable casting choices, Evans brought the Human Torch to life.   With his quirky wit and complete lack of shame, he stole the show.  Marvel comics? Check.  Voice work for the video game?  Check.

Fantastic Four-Rise of the Silver Surfer (2007): There had to be a sequel.  There is always a sequel.  That’s really all I want to say about this movie.

Push (2009): A prequel for this movie was released by Wildstorm comics before the release of the film.  Evans plays Nick Grant, a ‘Mover’ living in Hong Kong.  He seems right at home the world of ‘Pushers,’ ‘Shadows’ and ‘Shifters.

The Losers (2010): He takes off the tights to play Jensen in the adaptation of Andy Diggle’s The Losers.  More A-Team than Dark Knight, The Losers is a fun filled action movie. It didn’t break any box office records but it’s definitely worth watching. Vertigo? Check.

Captain America (2011)/ The Avengers (2012): Marvel was the talk of the San Diego Comic Con with the announcement of their Avengers line-up, five minute Thor trailer, and teaser of Chris Evans as Captain America.  Some people questioned Marvel’s choice in actor.  Can one guy play two different iconic marvel characters?  We’ll see in 2011.

Marvel, Vertigo, Wildstorm, IDW-Chris Evans has tackled them all.  He’s crossed genre and company lines.  Who knows, maybe in the future he’ll weasel his way into a superman movie, or play one of the Riverdale gang. For his extensive comic book movie portfolio, I nominate Chris Evans for Comic Book Movie King.

Any ideas who could fill out the rest of the royal family?

Jill Nagel spends far too much time thinking about movies and can been seen in various theaters alone because she has no friends.  She blogs at www.nerdvortex.wordpress.com and can be reached at jillnagel815 at gmail dot com.