The Daily Mirror has gotten some set photos of Chris Evans as Steve Rogers during a Manhattan chase scene. It looks like he’s strapped on some prosthetic feet to protect his feet as he does some kind of barefoot chase which I am going to guess happens shortly after he undergoes his transformation. From the set photos, I am going to guess that right after he is injected with the super-soldier serum and  Erskine gets shot, Steve chases the killers down the street and we get to see how much improvement the serum has given him as he runs down the street. 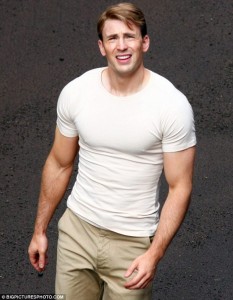 Evans looks fantastic as Steve Rogers in these pictures. He’s got a good body build, his hair style looks correct and it looks like he carries himself well as Steve Rogers. Well, maybe not in the picture where it looks like he is about to catch the girl firing the gun, there he looks like a constipated baboon that was photoshopped in, but you can blame unfortunate photo timing for that. I’m pretty damn excited about this. More so than the weirdness that is X-Men First Class anyways. 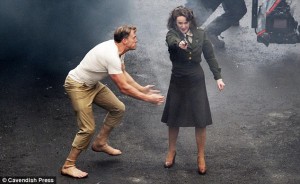 Not the best timing for photograph but it looks damn funny. 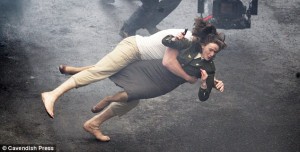 NOMINATIONS FOR THE 2010 JOE SHUSTER AWARDS

Why are we thinking about this? #2