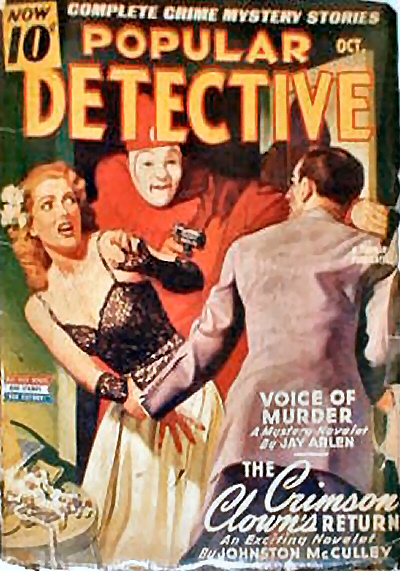 If you’re at all familiar with me at this point you’re probably aware that I have a thing for classic pulp characters. There’s something romantic about the 1930s era masked adventurer who had their own form of justice. Specifically I’ve always enjoyed the idea of masked men going against authority, and being chased by the law.

Zorro was my first, then I discovered the Shadow and then I got an appreciation for Batman via Year One.

Either way, pulp characters are a wide and varied group – which accounts for why Zorro creator Johnston McCulley could create a character named the Crimson Clown. Here’s the jist:

Delton Prouse is a man with a mission: to steal from the rich and powerful and give half of the proceeds to the poor through charity. The other half he keeps for himself so he can continue to hobnob with the rich and powerful. He gets away with it because he has a perfect modus operandi. He dons a red-hooded clown’s outfit over his street clothes and packs a pistol full of pepper spray. He also carries with him a syringe full of a drug that will knock a person out for a half hour—and he’s not afraid to use it—on himself if it will help him escape.

Tell me that’s not awesome.

Well Franco Francavilla the artist on Zorro and next week’s Garrison – has a HUGE affinity for the pulps. His website Pulp Sunday is a beautiful collection of adoringly rendered pulp heroes from all generations – including his own creation the Black Beetle.

Last week on twitter, he started something called Pulpfest Week wherein he took suggestions from followers over what he should draw. I tossed out the Crimson Clown on a lark.

and he took it and ran.

You can see the final version over at his blog.