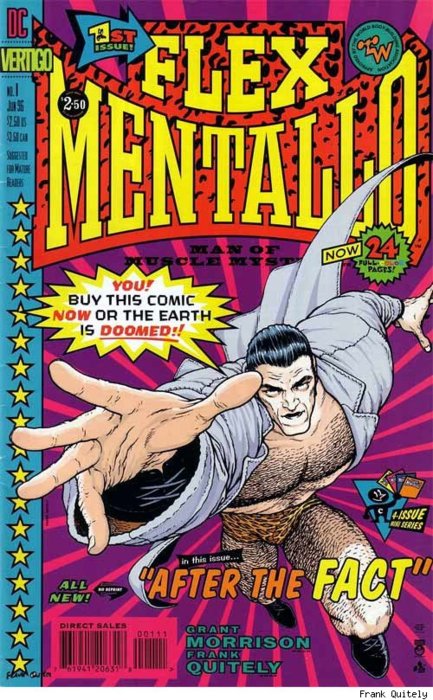 Well, looks like the 4 issue mini-series will finally be reprinted! I’m still okay with getting my four issues (my four ..very expensive issues) bound together in a nice hardcover, but be sure that I’ll be buying this again.

For those of you who aren’t aware; Flex Mentallo is, along with the Alan Moore and Neil Gaiman issues of Miracleman/Marvelman, one of the most sought after ‘lost’ works of the modern age.  The reprint announcement was made Tuesday morning on Vertigo’s Graphic Content blog, where it was also indicated that the Flex Mentallo hardcover would come with some form of bonus material.

Flex spun off from Morrison’s Doom Patrol run focusing on a character based around the famous Charles Atlas ads where scrawny young boys were encouraged to purchase Atlas products to help them bulk up to repel bullies and attract women. (How Mac Became a Man, or something along those lines) Atlas got pissed and sued DC, DC won, but promised not to reprint it. (or so the legend goes.)

Either way, we’re getting it now – which means that we truly are living in a golden age.

If you want to know how the Atlas company came to know Flex Mentallo and the interesting things that arose from them. I highly suggest you check out The Transmigration of  Flex Mentallo.

In the mean time, I’m gonna go read that reprint.