Ok, so imagine you’re attending a convention and it’s not just a regular convention, it’s the frigging mother of them all and you’re all jazzed to be there. I’m fairly sure the last thing you expect to be happen is to be stabbed in the eye by another attendee over seating arrangements! Unfortunately that seems to be the case as varying reports about what happened have surfaced. But the general consensus is that a Harry Potter t-shirt wearing fan stabbed another fan following a Resident Evil panel in the H Hall while waiting for the Seth Rogen film Paul panel to happen. But given that it was a Harry Potter fan…I’m sort of hoping that he used a wand instead of a pen to stab him and yelled “expelliarmus” as he did so.

I think incidents like this just prove that in order to maintain some calm in the future comic-cons, they have to clear the rooms inbetween panels. This will clear out all the annoying Twilight fans who camp Futurama panels and prevent wand stabbings in the future. 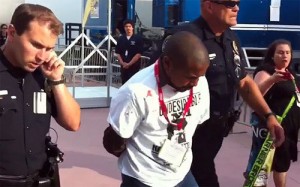