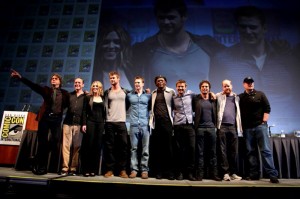 The guys over at i09.com had a chance to corner at a comic-con party and ask him some questions. Read on!

The JJ and the Joss panel was great. How does it feel to finally be able to talk about The Avengers and have that off your chest?

It is a great relief, to actually just go ahead and say, “I have a problem.” To come out to people and say “I’m directing the Avengers.” And the first step is admitting it, and hopefully I’ll be cured, in two years.

You know what the big rumor is now? That you admitted at the Joss Experience that Nathan Fillion was Ant-Man. Is that true?

No that was a joke. Unfortunately there is no such thing as sarcasm at Comic Con. That’s why I explained that he’s not actually Ant-Man – although by the way I think he would be great – Ant-Man does not appear in The Avengers. I just like to play with Nathan. And if you ever get a chance to ask him to do his Ant-Man audition, you will not be disappointed.

Is there any way you could expand on that just a tiny bit for us?

It just really just goes back to the very first incarnation of The Avengers. It goes to The Ultimates, it goes to everything about it. It makes no sense, it’s ridiculous. There’s a thunder god, there’s a green “ID” giant rage monster, there’s Captain America from the 40s, there’s Tony Stark who definitely doesn’t get along with anybody. Ultimately these people don’t belong together and the whole movie is about finding yourself from community. And finding that you not only belong together but you need each other, very much. Obviously this will be expressed through punching but it will be the heart of the film.

Are you tempted to pin [play with] the Civil War with Captain American and Iron Man against each other?

You know Civil War comes from what’s great about the dynamic between them. And so does The Avengers, they definitely are at odds. But it’s not a Civil War thing because it existed before that, at least in my mind. They are two very different definitions of a person. One is a self-made man, a modern man, a rockstar. The other is a World War 2 grunt, just trying to do his part. They couldn’t have more different views of the world. That will just end up in fun. It ended up in Civil War in the comics, in my movie it will be witty banter.

What do you think about comics today? Is there something missing?

I would say something is missing in comics today, but I’m a little bit of a curmudgeon and there’s white in my beard. I feel like something’s… a trend gets squeezed out too much. If it’s nihilism, zombies, whatever the latest thing is, or rebooting something that you already love. Whatever it is, I feel like they’ll do it for a little too long. And I’m waiting for the next thing. Believe me, I’m not going to be the guy to come up with it, and I can’t wait to see what it is. But I do feel a little like we need to make the next step. Comics need to blow up in a new way. The way they did when Alan Moore and Warren Ellis and those guys in the 90s tore it up with ABC and The Authority. We need the next version of that and I don’t know what that is.

This is some pretty exciting stuff from Whedon. Captain America and Iron Man going back and forth with each other with witty banter? love it. Though I have a feeling Cap’s witty banter might be more of a ramming his shield into Tony’s crotch than anything else. I also really agree with Whedon on what he finds missing in comics. When Marvel and DC hit on something popular they do their best to run the damn thing into the ground. Marvel Zombies 3, 4 and 5 anyone? Or after the success of Sinestro Corps war being a successful event that was mainly confined to it’s core titles, we got the super bloated Blackest Night stuff.

David Diep is a News Editor for Comic Book Daily and wishes he really was at San Diego Comic-Con. Alas, there always is next year.