The guys at Fandago had an interview with Tom Hiddleston about his role as Loki and his choices in fighting style and weapons. Loki wielding Odin’s spear versus Thor’s hammer makes it seem like we’ll get a pretty epic fight scene in the climax. Well that’s what I’m hoping for anyways and not some 5 minute charge up scene where it ends in one shot. I wanna see a down and dirty brawl with faces being bashed in norse-style! 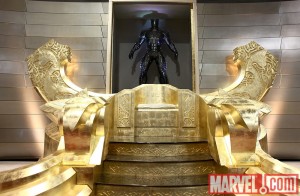 The Destroyer armor looks pretty bad ass. Granted it is pretty hard to screw up getting it right since the armor is pretty simplistic and looks kind of grounded in reality. Apparently in the comic-con, the unmanned Destroyer armor goes trouncing through the halls of a Shield complex.