Came across an excellent Mark Waid interview on Sotocolor.  What really set this head and shoulders above a lot of interviews was the depth of the questions and the relatively short length. 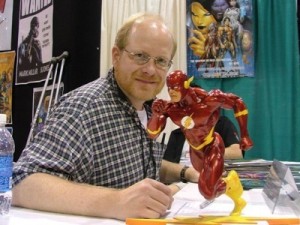 One response from Waid piqued my interest:

[quote]The 50,000+ hardcore fans of periodical print comics that we have left, the ones we haven’t and can’t drive away, seem to indicate with their buying patterns that they’re interested only in nostalgia, which is terrifying. And I understand why publishers cater to that; they’re kinda forced to, given that the print distribution system is targeted SOLELY TO THOSE 50,000.  I can’t wait to hear what the non-hardcore audience wants; digital will tell us that. I don’t care nearly as much what “comics fans” want as I do what “potential readers” want.[/quote]

Are mainstream comic fans interested only in nostalgia?  If we take a step back and give a broad sweeping overview mainstream comics are about super powered good people beating up super powered bad people.  It’s been done for almost eighty years now and since the formula hasn’t changed in that time I would say Waid’s right.

Of course these North American superhero comics are just a very small part of the world graphic novel market and perhaps if more mainstream writers did books that didn’t conform to this perhaps they could reach that potential reader market.

When I hear “nostalgia” and “comics” together I immediately think of the wondrous comic strip reprints we’ve been privy to the last few years.  I’ve read from industry folks we’re in a “golden age of reprints” and with such amazing works as Prince Valiant, Mickey Mouse, X-9 Agent Corrigan, Rip Kirby and so many more I heartily agree.  It’s not just the availability of historic content but the quality of production that makes each of these a treasure.  As well these further fuel Waid’s argument and illustrate how non-superhero comics continue to flourish.