Two librarians were terminated from their positions at a Nicholasville library when they refused to allow an 11 year old girl to check out the League of Extraordinary Gentlemen by Alan Moore. Whether or not the LOEG books can be considered to be obscene is a whole other matter (Personally, while there may be a tiny bit of nudity in it, it’s not exactly titillating and it fits into the context of the story). The issue at hand is whether or not the librarians had the right to deny the girl the right to read the book. Another interesting thought is does the fact that the material in question is a comic book have anything to do with this? Would they have been so adamant about not allowing her to check it out if it was the movie Titanic? (Which does feature just as much nudity in it as LOEG) I’d also really like to hear Alan Moore’s take on the matter if he ever gets wind of this.

Send us your thoughts! 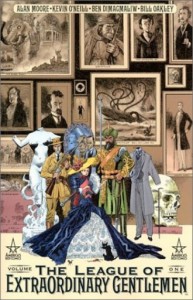 Grant Morrison Gives His Perspective on the DC Comics Reboot

Batman, Why don’t you purify yourself in the waters of Lake Minnetonka?