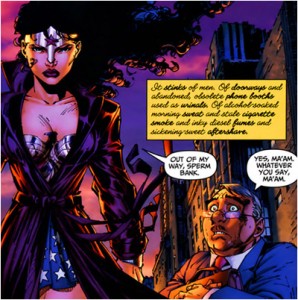 It’s a pretty slow news day, so I’ve been doing some trolling around looking for anything new and exciting. In saying that, consider this one of those ideas that never happened, and maybe the world is sadder for it.. maybe not. Depends on which Frank Miller would have written it.

It seems like back in the day – 1986 to be exact – Frank Miller was touting his upcoming Batman: Year One storyline to Amazing Heroes and he explained a concept that he and the late great Steve Gerber were pitching to DC at the time:

Actually, “Batman: Year One” has its origins in Miller’s concept for the original Dark Knight series some years ago. It was then that Miller and Steve Gerber proposed to DC their idea for the “Metropolis” line of comics, which would revamp DC’s three principal characters and start their continuity over again from the beginning. The new Wonder Woman series would have been titled Amazon, the new Superman series The Man of Steel (which, of course, would not have been the same as John Byrne’s series of the same name), and the new Batman series would have been called Dark Knight. “I plotted the first four issues of the Batman title,” Miller says, but the Metropolis line was never launched, and he later used some of the ideas he had worked up for the Batman in his recent graphic novel series.

It’s worth taking into account that the 80s were a really good time for Miller as the writer. He used to write brilliantly and poetically. Year One is crammed with beautiful turn of phrases that it’s almost hard to believe that this is the man who is writing All-Star Batman and Robin. While I’m sure that his concept for Wonder Woman would be a far cry from the man-hating Diana of ASBATS and maybe more in line with he warrior goddess of DK2, it would be amazing to get it’s hands on some of his scripts. 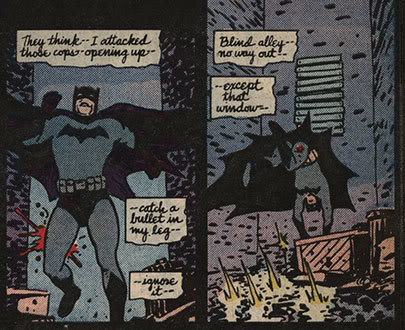 I get kind of tingly imagining Year One’s Batman meeting with a Mazzucchelli-esque Superman and Wonder Woman.

It’s the realism of Year One (and Daredevil Born Again) that got me hooked on comics in the first place. I still love the way the Mazz draws Batman – a real man in suit, at physical perfection – in a city that’s familiar. I’d love for the same team to have tackled all of DC’s Trinity.. but alas these things would never have worked.

However in saying that ..maybe that’s what DC’s Earth-1 graphic novel series is trying to do, but I hold out judgment.

That Miller.. so ahead of his time.