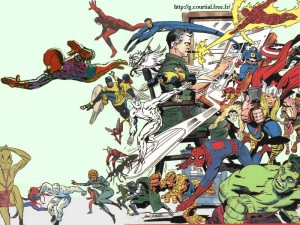 That’s right, the heirs of Marvel great Jack Kirby have filed suit against the company. According to the Media Decoder Blog; the focus of the lawsuit seems very similar to the case that the Siegel heirs had. They have filed 45 seperate accounts to terminate Marvel’s hold over copyrights for characters their father helped create. Now, this has pretty massive implications for Marvel, simply because Disney bought them pretty much for the sole purpose of gaining access to their characters. Imagine all of a sudden they couldn’t make movies based off the Hulk or the Fantastic Four? Chances are, they would drop Marvel like a hot potato. More after the jump.