The inaugural Las Vegas Comic Expo (LVCE) took place at the Riviera Casino and Hotel on the weekend of September 29 and 30, 2012.  The Riviera was not the original 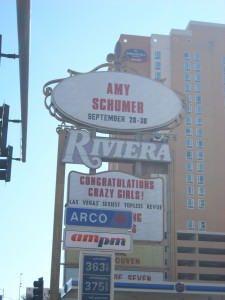 venue for the LVCE.  The original venue was located off the Las Vegas Strip and suffered heavy water damage from flash flooding a few weeks prior to the start of the LVCE so it was moved to the Riviera.  The organizers of the LVCE followed the typical template of the current modern day comic convention.  The programming at the LVCE included panels, workshops, gaming and a cosplay contest.  The exhibitor area was divided into a dealer area, an artists’ alley and a small signing area for the media guests.

The focus of the LVCE was primarily comic books.  There were no major media guests except for Tricia Helfer and Thomas Jane who were both last minute additions to the show and appeared only on Saturday.  Based on the type of books comic dealers brought and the type of costumes I saw, there was little to no manga presence at LVCE.  What was available was a good mix of vintage and modern comics.  There were also long boxes of cheap back issues ranging from $0.50 to $1 as well as TPBs.  The guests who headlined the show included J. Scott Campbell, Adam Hughes, J.G. Jones and Mike Mignola.  The majority of the programming featured panels and workshops involving creators from mainstream and independent comics.

I liked the Riviera as a venue.  Its proximity to many food vendors was very convenient.  The Riviera has a pub, a Chinese restaurant, buffet and a food court.  Across the street is the Circus Circus food area and a McDonald’s.  Unfortunately, to get to the food areas, you had to go through the casino and all casinos in Las Vegas allow smoking on the casino floor.  The Riviera also provided large containers of iced water in all five of the rooms used by the LVCE including the exhibition area so I did not have to spend any money to keep hydrated.  One thing I did not like was how far apart the exhibition area was from the rooms that held the panels, workshops and charity auction.  They were at the opposite ends of the convention area and I think that distance caused the LVCE to lose a bit of the synergy between each of its components.  However, this might not be by choice since the Riviera was a last minute replacement and there was a darts tournament being held at the same time in the Riviera.

All five rooms had way too much capacity and that’s actually a good thing from a fan’s perspective.  I did not have to line up for any panel and always found a seat.  There was only one panel or workshop that had people standing at the side of the room.  I was very appreciative that the Tricia Helfer Q&A was not well attended.  At Fan Expo, she would be in Hall G or one of the other larger panel rooms with a massive lineup to get in.  There was ample room to walk around in the artists’ alley and the dealer area.  There were times that I saw a line for some artists (like J. Scott Campbell) but nothing unreasonably long.  The exhibition area had so much room that there was a large empty area that could hold a few more dealer tables.  Again, the LVCE organizers probably did not have much of a choice in the rooms given the last minute change in venue.

The cosplay at the LVCE was quite good as demonstrated in the photo parade with a lot of diversity in the costumes as well as imagination.  What I could not show in the pictures was that some people were fully immersed into their characters.  The person dressing up as Bane spoke like Tom Hardy and I think he even quoted part of the long speech Bane did in front of the courthouse from The Dark Knight Rises. I use the word “think” because I had as much trouble hearing Tom Hardy talk in the movie as I did with this cosplayer.  Also, the guy dressing up as Thor had a personality suited for a thunder god and a voice as well.  I could hear his battle cries halfway across the convention floor.  According to the organizers, the number of participants for the cosplay contest was larger than expected.  It was also the most attended panel at the LVCE with standing room only.

The gaming was held in a room that was way too large for the number of gaming participants.  It was located in a room adjacent to the exhibition area.  I looked in a few times on both days.  While there were people playing, they were outnumbered by the number of unoccupied tables and dwarfed by the size of room making it seem rather empty.

I get the impression there will be another LVCE next year, since all cosplay contestants received a free pass for next year’s LVCE.  If the LVCE is going to use the Riviera again and has the extra floor space, what I like to see the organizers do is offer some tables to local fan groups and other local events.  This year, Anime Vegas received a table to advertise its upcoming event in November.  There might be a local sci-fi or book festival that might want to advertise at the LVCE.  In the Toronto comicons, fan groups of Ghostbusters, Dr. Who and Steampunk have a large tables set up.  Their presence might dilute the purity of the LVCE from its comic book focus but I do not think it do it any harm. 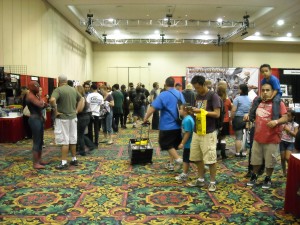 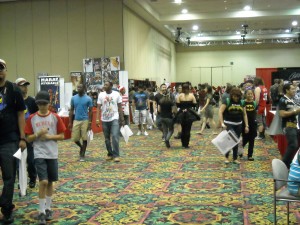 I had a good time at the LVCE and I am glad that I attended the inaugural edition of it.  I am not sure how large the comic community is in Las Vegas but it certainly seems like it can support a two day comic convention.  The LVCE has a chance to grow into something bigger.

All photos courtesy of Stanley Jon.