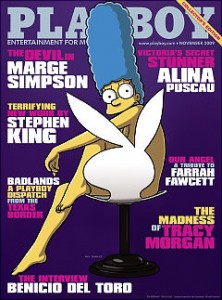 No longer do those with cartoon fetishes have to troll through various seedy forums to find paint shop versions of nude pictures of Marge Simpson – and you have Hugh Hefner to thank.

Playboy magazine is turning over its cover to the matriarch of Springfield’s first family: Marge Simpson for its November issue.

It’s a first for the magazine, which has had everyone from Marilyn Monroe to Cindy Crawford to Darva Conger (she was the girl from “Who Wants to Marry a Millionaire?”). But it’s never had a cartoon character before.

This isn’t the first for a cartoon character to appear nude for an adult publication. Hack/Slash’s Cassie appeared on the Suicide Girls’ website, and I used to draw pictures of a naked Wonder Woman for my elementary school friends for two bucks a piece.