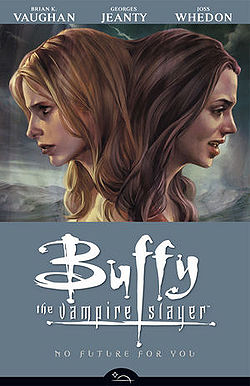 I know, I know. I’m only supposed to be here on Thursdays but apparently I’m Comic Book Daily’s resident Buffy expert so when this story came up, they asked me to comment.

So apparently my beloved Buffy comic that I wrote about a couple of weeks ago is being turned into a motion comic. For those who haven’t seen one yet, these are downloadable comics with voice overs and movement.

Kind of like those old 60’s era Marvel cartoons but slightly better.

The storyline being motioned (I guess that would be the correct term) is No Future for You a story line that involves Faith going undercover with a slayer who has turned to the dark side.

But this one has some Buffy fans up in arms over the fact a casting list has gone out for voice overs and apparently they are looking for someone to fill Eliza Dushku’s shoes as the roll of Faith. “Why isn’t she doing her voice?” “This is a travesty! There is only one Faith and that is Dushku!” “Does this mean they’ll recast the other main characters as well?” etc, etc.

And to that I say a big resounding…..

I dislike motion comics, it’s trying to be the best of both worlds and it doesn’t work for me. It’s not a cartoon but it makes the comic book annoying because panels move and have voices. My theory is either be a cartoon or be a comic book, straddling the line just makes you a gimmick.
That not withstanding if I were to download the motion comic, would I want the real actors doing the voice overs? Ideally yes. Would I expect it? No.

The reason for that is pretty simple.

If you go over the casting notes the one thing that everyone should have noticed is that the casting call is non-union.

There are a couple plausible reasons for this but more then likely it is to keep the voice over inexpensive thus keeping the price of the motion comic cheap for download.

I am not an expert on Ms. Dushku’s career but I’m willing to bet she a union member. Which means as a union member she is guaranteed a certain pay level. Probably decent enough that it completely ruled out een asking her to take part in this.

I’d also hazard a guess that the other main Buffy cast will be replaced as well.

And if it isn’t the money it could be one of a dozen things. Up until recently Ms. Dushku had a television series that she starred in and also served as a producer. She is also in a relationship so I imagine she probably likes to try and have a little bit of a life in her off hours.
Does this effect the product?

A little but if these fans stopped to think about it, how many other things are in their collections where the voice overs aren’t done by the originators of the roles? Think of 98% of the Star Wars cartoons and video games out there for instance. And while the Buffy video games have featured many cast members reprising their roles but Buffy was replaced in both the X-Box games as was Anya and Willow in the second.
So I guess what I’m saying is if you were going to give the motion comic a chance, I’d do it anyways.

But really I’d suggest going out and buying the comics because the voice over cast in your head will probably sound better.

Brent Chittenden is a Canadian based freelance writer and one of the Two Assholes Talking About Nerd Stuff that can be found at www.nerdholes.blogspot.com.  When he’s not doing that he roams the country side looking for leprechauns.