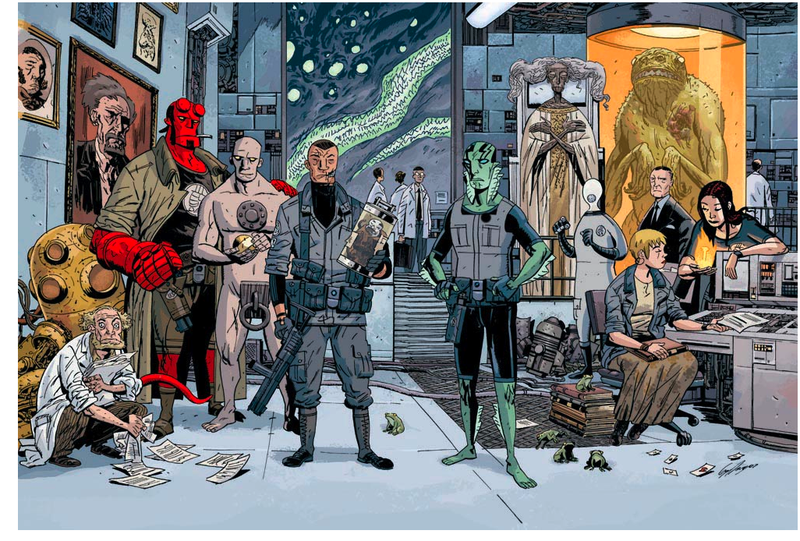 artoriginals presents master of the macabre and B.P.R.D. artist Guy Davis, who will be making a special Toronto appearance at the Gladstone Hotel on Saturday, February 27 for an interactive workshop and exhibition followed by an appearance at  Toronto ComiCON as a featured guest on Sunday, February 28.

Davis, recipient of the 2009 Eisner Award for Best Artist, is best known as the penciler and inker on Mike Mignola’s long running series B.P.R.D., chronicling the supernatural tales of the Bureau for Paranormal Research and Defense. Mignola, best known as the creator of Hellboy (who was a former member of the B.P.R.D. team), is also the series writer. The Hellboy property has spawned two feature films and several animated versions. Fans and many industry insiders believe that B.P.R.D. is likely to be the next Mignola property that will be adapted for the big screen.

Selected works spanning Davis’ career, including Sandman Mystery Theatre, B.P.R.D. and The Marquis, will be featured in the exhibition along with an interactive and insightful workshop for registered patrons.

Constructive Storytelling: The 180 Minute Master Class, 1 – 4 pm: Master artist Guy Davis is set to provide patrons with the key components of his vast storytelling bible. The lecture, demonstration and Q&A elements are a unique opportunity to get inside the head of one of the industry’s most renowned visionaries.

Of Mystery and the Macabre, 7:30 – 11:30 pm: featuring selected works from Davis’ award-winning projects including Sandman Mystery Theatre, Mike Mignola’s B.P.R.D. and The Marquis. A brief question and answer period hosted by Mark Askwith of SPACE will precede the exhibit.

Please direct all inquiries to:

artoriginals offers comic book and illustration enthusiasts a unique opportunity to interact in an intimate setting with their favorite creators over a weekend in Canada’s largest city. Contemporary cartoonists and illustrators will take part in workshops, exhibitions, lectures and artists’ talks revolving around themes central to their work.

All activities for artoriginals will be held at the historic Gladstone Hotel in downtown Toronto, a favourite with the local arts scene. Voted one of the top 10 Art Hotels in the world by Lux Magazine, the Gladstone has been in operation since 1889 and is the oldest continuously operating hotel in Toronto.

Toronto ComiCON is the annual two-day comic book convention event hosted by Hobby Star Marketing, Inc. (HSM) and was founded in 1992 as one of Canada’s premiere sports and entertainment marketing agencies. Since the beginning, HSM has specialized in placing professional sports and entertainment celebrities at a variety of venues in addition to hosting its own signature events which include: