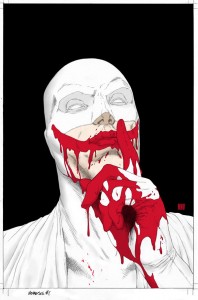 CBD has covered Mark Millar and Steve McNiven’s new comic, Nemesis, since it was just a vapour. We also mentioned Millar’s plan to auction off the name of the cop who goes up against the titular character in Nemesis for charity, just as he did the name of the lead in Kick-Ass, won by Dave Lizewski. And currently about to be given worldwide exposure in a major motion picture starring Mcloving and Nick Cage.

Well, it’s happening now. The auction will benefit the charity that Mark Millar’s brother, the doctor, works with, caring for handicapped children in Scotland. Mark is quoted in the eBay listing saying;

My older brother, Dr. Bobby Millar, works with these children every day and he explained to me what a difference it would make if they could get a new bus. Resources are tight at all schools and hospitals in the current economic climate, but we had a great success with the Kick-Ass auction and feel hopeful that comic-book readers will dig deep again and they can build towards this pretty hefty amount of cash they need for the vehicle. Steven and I have had an amazing run of luck with Civil War and Old Man Logan and we’re hoping “Nemesis” will be similarly massive. To star as a comic-book hero is pretty cool and the intense movie-studio and production-company interest for “Nemesis” before the book even hits the stands should bode well that whoever wins this auction will get their name out there in many other media too, just like Dave Lizewski. I really hope people get behind this as the staff at the school do a terrific job and the kids would be delighted with this nice, new bus everyone has their eye on.

So there you go then. Dynamic Forces has helped organize the charitable aspect of the auction. Which is live as of…. now. Click here to bid.