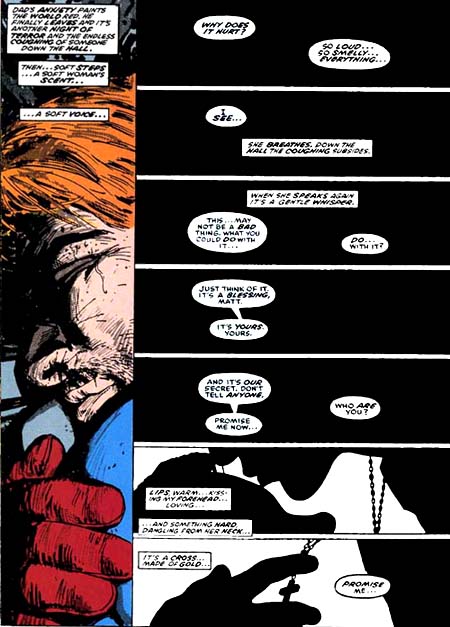 An Example of Joe Rosen's work

Todd Klein reported today that long time letter Joe Rosen passed away. Rosen had lettered everything from Captain America, Spider-Man, The Incredible Hulk, The Further Adventures of Indiana Jones, and X-Factor. He was one of the original letterers from The Stan Lee/Jack Kirby Marvel days alongside the Simek Brothers, Artie & Sam. Todd Klein had these kinds words to say: “I never met Joe, but admired his work… I liked him best as the letterer of many of Frank Miller’s DAREDEVIL stories such as [Daredevil: Born Again]. I appreciated his work, and thought it was smart of him to retire when he was ready and able, unlike some of his contemporaries who kept going until the end. Hope his final years were good, and may he rest in peace.”

In Todd’s comments two industry legends chimed in with praise for Mr. Rosen. Danny Fingeroth left this message: “Joe was simply the best, both as a person and a letterer. A truly class act. Having him letter a script always made it 25% better than it really was.” While Roger Sterm commented: “I am so sorry to hear this. Joe was indeed the best. I never knew the man, but he made us all look good.”

As for me, I’d like to take a second and really talk about the impact that Daredevil: Born Again had on me when I read it. A lot of praise is thrown at that title for good reasons, Miller’s script is the best he’s ever written, Mazzuchelli elevated his artwork to give us the first ever “widescreen” comic – you can see his fingerprints all over Bryan Hitch’s Authority Run – but what always really stood out for me was the beauty of the lettering. It was that simple statement in it’s cryptic typewriter font that really drew me in: “My name is Ben Urich and I’m a reporter.”  The fact that there were three narrators, or really two narrators as the Kingpin, Karen Page and Murdoch’s thoughts were often switching from first to third narration, colour co-ordinating each thought only really helped me become totally immersed in that world.  Many letterers have copies this device, sometimes it worked, sometimes it doesn’t. But for me, I’ll always be truly greatful for the work that Joe Rosen did in that story.

Conan Has Been Crowned

Batman Versus Robin and Versus History?