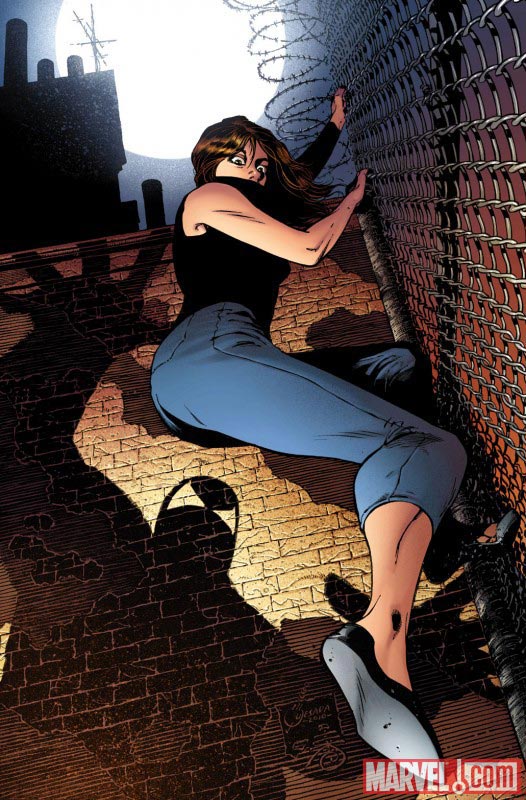 Great things and terrible things have a single thing in common. Eventually, at some point, they come to an end. Such is the case with this polarizing storyline that has divided Spider-Man fans ranging from readers to creators. Issue #641 of the Amazing Spider-Man marks the end of Joe Quesada’s One More Day/Brand New Day story with part four of the story arc One Moment In Time. Does this final installment salvage this controversial story, or is it worth omitting altogether? Fly into my parlour to find out. 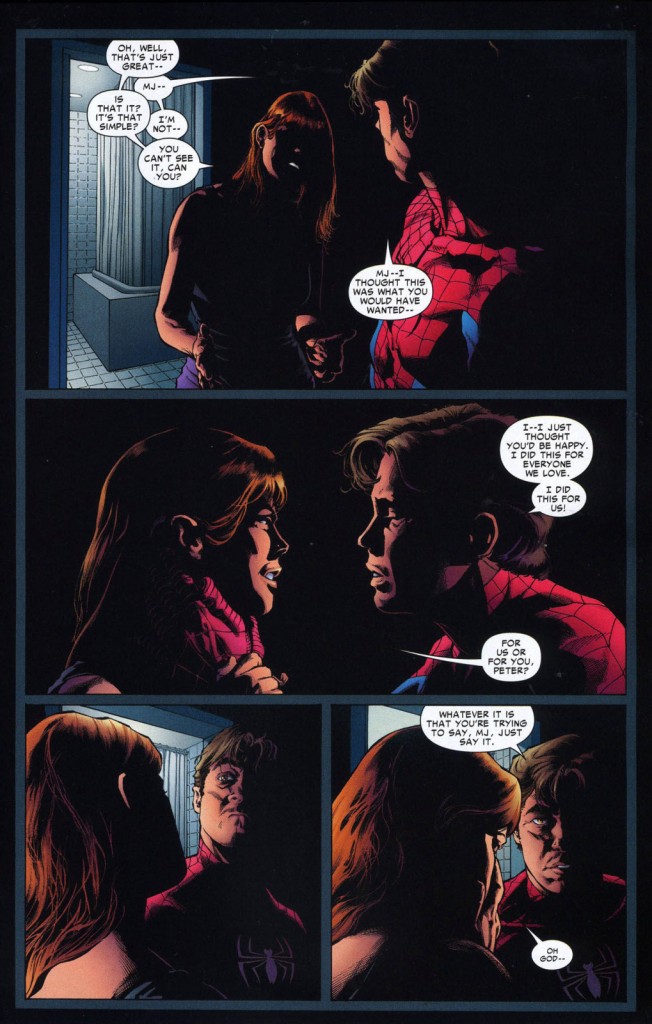 With a single gunshot Peter Parker’s world changed forever. With Aunt May’s life hanging in the balance, Peter and Mary Jane make a deal with the demon Mephisto where May’s life is spared in exchange for their marriage. What was the cost of this, and what happened in the aftermath of One More Day? OMIT illuminates the lives of Mary Jane and Peter as they reminisce about their relationship and Peter’s identity as the web slinging wall crawler.

Similar to the preceding three issues, issue #641 starts with MJ and Peter sitting in his apartment as they continue to talk about their relationship. After looking to opt out of the conversation, Peter continues to tell his story about Dr. Strange and “that creepy thing he does.”

In the next scenes we see Dr. Strange speaking with both Reed Richards and Tony Stark about how they can fix the mess they’ve made and dragged Peter through indirectly. Finally after the three former illuminati members agree to mind-wipe the world, they combine their mastery of the mystical arts and science to broadcast an anamnesis storm worldwide. Strange creates a protective bubble for Peter, allowing him to be the guardian of “mistakes that never transpired”. Peter enters, but hardly lasts long before he dashes outside the shell to grab MJ and bring her inside the shell with him. Peter simply says he can’t live any life with her based on a lie.

The two leave Strange’s home quickly and go back to the apartment where they fall asleep on their bed. Peter awakens later to an empty bed, only looking over to find MJ crying in the washroom. Both still coming to terms with what Dr. Strange did and what it means for them, MJ and Peter question Peter’s decision to drag her into the protective shield. She wanted nothing more than to forget along with everyone else. They embrace each other as Peter’s phone rings, telling each other they love the other before tearfully leaving departing. Peter goes to the hospital to visit Aunt May, while MJ leaves town so she can gather herself. After a splash page chronicling

their history together, two pages follow. We see Peter in the hospital with his Aunt, while MJ looks up at the hospital several blocks away as she prepares to leave.

Bringing us back to the present, we find Peter and MJ in the apartment. MJ tells Peter that before she left she wrote Peter a letter. When Peter questions her about it, she tells him all it said was, “I love you.” MJ explains that she wishes she was strong enough to be with him, but that she’s not and may never be. She then tells him that he needs to find someone that is, and that he needs to move on. They embrace each other one last time as the scene segways to a silver New York City landscape. The scene pulls back gradually to reveal it to be Spidey’s costume’s eyes. The issue closes with a monologue, where Peter says his best friend, the best person he’s ever known set him free, and that for the first time in a long time he feels like his destiny’s his own. Peter tells us he feels like he can take anything life can throw at him. Why? Because it’s a brand new day. 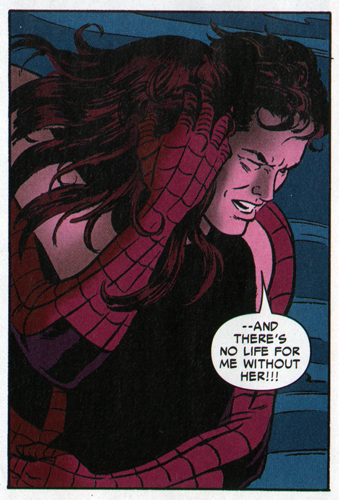 Rivera continues to excel despite his style’s shortcomings at one thing. What he does do exceptionally well are his transitions between panels, notably as Peter enters Strange’s protective shell. Rivera treats us to some heartbreaking panels as we watch Peter as he watches MJ laying motionless beyond the bubble’s threshold. At the last moment as the Strange’s spell takes its final effects, Peter leaps out amidst blue mist to grab his love, and brings her inside the shell. As the mists dissipate, all we see are the two of them together, Peter holding her in his arms. It’s not enough to overlook the rest of his work, but moments like these through the story’s four part arc have been well worth it.

As for Quesada’s work, it’s much more vibrant than Rivera’s and that alone helps it stand out from the book’s flashback sequences. Although not a fan of Quesada’s art usually, it does stand out in this book. I really liked his last few pages in the issue, where we see the city landscape’s reflection in Spider-Man’s eyes. Quesada gradually pulls the view back to reveal himself standing atop a building as he fires a web and swings away towards a brand new day.

Ugh at your discretion. 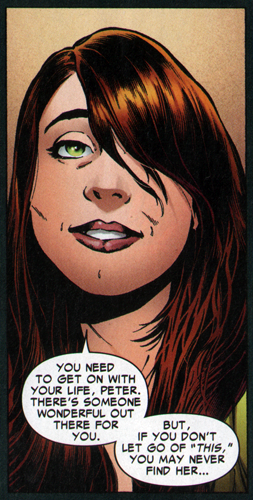 So here we are. The end. This story was three years in the making, and for the most part it was nothing more than we should have expected. OMIT was intended to explain the background behind everything that happened off-panel between One More Day and Brand New Day. In terms of the book’s mission, consider it accomplished. Over the course of the last four issues we learned the final details about MJ and Peter’s deal with Mephisto, and ultimately how Spider-Man’s identity was re-concealed.

This issue in particular is used to place the final stamp on Quesada’s mandated status quo for comic book land’s favourite webhead. And for what it is, it succeeds. Stemming from the Civil War story, we saw him reveal his identity, and the consequent events that followed. Aunt May was shot and clung to life precariously. MJ was constantly in danger, on the run with Peter as they tried to find care for Aunt May. This culminated in the reviled Mephisto deal that catalyzed the rewriting of Spider-Man’s history.

OMIT did two things right, which I’ll get into first. One, it treated the relationship between MJ and Peter with the overall respect it deserved. The two characters love each other, and that was the prevailing theme throughout the story. Love; what people will do for it and out of it. Even more, we see the tragic elements of it and the decisions people will make because of the burdens it carries and what it means. Years from we now we will probably look back on this story and see it as the beginning of the tragic love story between the two; they love each other, but for the sake of the other, have to remain a part. In itself, that’s a great story. Add as well that they are the only two to remember his identity, and we have another layer added to the relationship. Secondly, it established and entrenched the importance of both characters in the other’s life.

Adding to that, it completes the tragedy of the Mephisto story. He won. The writing was solid in its effort to competently tell the story of how Mephisto rewrote their lives, and did so in a way that it made sense.

Here’s the problem. Only Joe Quesada knows how much of this was planned. Perhaps this end game was part of the planning process for Civil War. Perhaps this spiraled out of it organically. Who’s to say?

I acknowledged this in the previous issue’s review, but the story as a whole is forced. The story was written regardless of its genesis because Joe Quesada wanted the character to be written in a certain way, so much that it led to a highly publicized falling out with co-writer J. Michael Straczynski during One More Day. Even more importantly, the book really feels like it was written in hindsight, and I’ve never really had that feeling after reading a book before. It goes back to what I said before. This story feels forced, it feels mandated and rigid, and a well-written story shouldn’t feel that way.

It’s ripe with Quesada’s mandate which he summarized in a CBR interview shortly after One More Day. He said, “I’m going to live by the theory that I’ve always believed in –that a Peter being single is an intrinsic part of the very foundation of the world of Spider-Man.” And that’s debatable, because he’s been entirely defined by his relationships, specifically Gwen and MJ. It builds towards the argument that this was a personal decision, and it was done to the detriment of the character and a fan base that watched Spider-Man/Peter Parker evolve, and watched his relationships evolve. To erase that in the way it was done and for the reason it was done is a slap in the collective face of that fan base.

OMIT establishes and cements the new status quo for Spider-Man. It’s an era where MJ is not necessarily at his side. It’s also one where the giant reset button was pushed when it didn’t need to be. This story serves the purpose of completing the rebranding of Spider-Man for future readers, entrenching this status quo for as long as Joe Quesada remains at Marvel. It does not however do anything to soften the blow for longtime readers still upset by the decision, and that’s the true tragedy of this story.