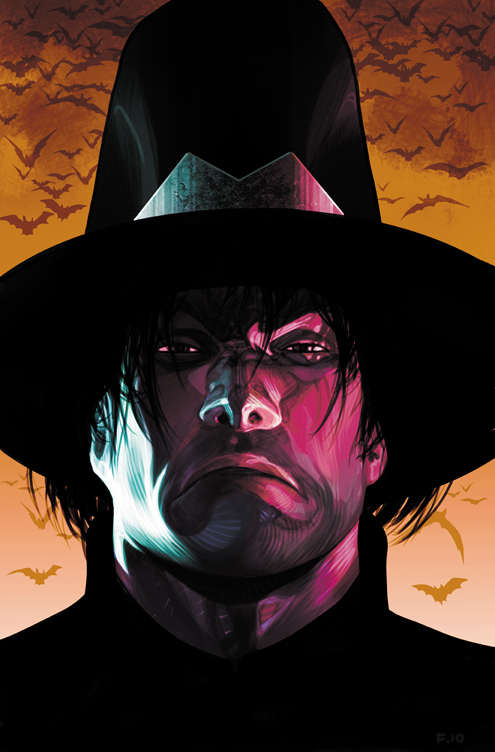 Greetings all. This week we’re looking at the second issue of Grant Morrison’s mini-series, The Return of Bruce Wayne. Morrison continues his time traveling theme as we follow Wayne into another historical period, and subsequently we see his interactions with the people of that era. In the previous issue we saw Wayne acting upon primal instincts; for him this took the form of an inherent compulsion help and protect those close to him. Regardless of the era, he considers these people family and friends regardless of whether the character’s name is Dick Grayson, Alfred, or the Bat-People tribe from issue one. 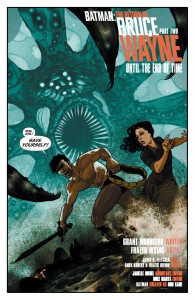 In the second issue we see Wayne wearing his detective hat as he tries to solve a murder during Gotham’s settlement period. The book picks up where the previous ended, with Bruce preparing to fight a large sea creature which ultimately gets the better of him in the opening pages. It’s here we’re introduced to Annie, a young woman who nurses Wayne to health, but has also been cast out of the city for her religious practices. The scenes from the settlement era focus primarily on Wayne’s detective work in solving the case, as well as the companionship shared between him and Annie.

The book’s other main plot point, the actual search for Bruce Wayne, alternates with Wayne’s detective work. Here we see Superman, Hal Jordan (Green Lantern) and the Time Masters (Booster Gold and Rip Hunter) at the end of time in the 64th century minutes before the world ends. The heroes have followed the residual energy from Darkseid’s Omega Sanction blast, and have used Hunter’s Time Sphere to reach the Archivist. The Archivist is a keeper of time of sorts, and explains how the time stream works to the time travelling heroes.

The plot is furthered reasonably, although one of my larger criticisms of Morrison’s work rears its head. Firstly, beyond Wayne’s detective work, Morrison reveals fairly interesting plot points. It’s clear Wayne’s memory has been wiped after being hit by the Omega Sanction in Final Crisis #6. Even more, it appears Wayne’s tremendous survival instincts were part of Darkseid’s plan; he apparently is counting on Bruce’s ability to make it back to his own time period according to the characters looking for their friend. It’s as if to imply he’s been booby trapped somehow. More on that in a bit.

Wayne can’t recall who he is, but as we saw in the previous issue, the core of who the character is and what it represents is intact. In the previous issue this was shown in how he rose to protect the Bat-People tribe, and now in his deductive skills and detective work in issue two. Morrison additionally reveals more about the cave Bruce Wayne awoke in; its history, as well some gleams into the importance of the Wonder Woman and Superman symbols inside it. 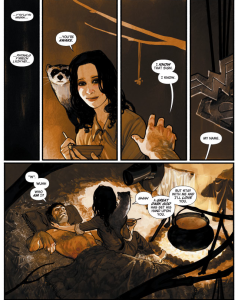 The bond between Annie and Bruce appears strong, built on genuine loyalty and care. Perhaps even love. Their conversation very early on in the book hints towards a timeless devotion to Bruce, which I can’t quite piece together yet. I doubt we’ve seen the last of “Annie”. There is another event later in the book which clearly ties Annie to the Wayne family, but you’ll just have read the issue to grasp what’s going on in Morrisonland. The biggest plot point is saved for the end, and no, it isn’t Blackbeard. It’s too sweet to spoil, but I shed a tear.

Although the books have been fairly great so far I still have issues with it. Aside from the rocket ship from the previous issue (an explanation couldn’t hurt, Grant). I mentioned before the revelation of Darkseid’s plans and its depth. In the issue, such an important plot point is glossed over. The way it’s presented here is similar to how many large plot points were revealed in Morrison’s Final Crisis mini-series. It feels like we were told this information in another book entirely, much like the finer details of Final Crisis were revealed in its tie-in issues. Morrison has a knack for being presumptuous in his writing, in that he assumes we know where he’s going and how each piece fits together. This style does lend itself to refined mysteries and clues for readers to keep them guessing, but such a plot point feels out of place in how it’s mentioned.

I feel like it really hurts the story because it feels like the plot device was revealed in another story, which isn’t the case. It’s been two years and we’re not even quite clear on what exactly an Omega Sanction is, much less Darkseid’s grander scheme. It feels like it’s coming out of leftfield here. Reading this issue felt like I was reading Final Crisis again, in that many threads were glossed over or forgotten. I’m not saying this is of that caliber, but Morrison’s tendency to not explain or set-up his plot devices hurts the writing, and this book was no exception in that regard.

This is only really noticeable during the Superman-Archivist conversations, where Morrison’s vision becomes too grand in scope, and he doesn’t explain the situation well enough. Yet, this is contrasted by the much more contained and cohesive focus on Bruce Wayne. These sections are tremendously detailed and well written in their intricacy. Because both plots are explored alternately, the book’s flow is disrupted and the book tends to feel disjointed at times. I know this sounds like I’m all over the place, but it’s representative of the book. Grant Morrison is at his best when his focus is more centralized into the intricacies of one aspect of the DCU, or his New X-Men run as examples. His Batman run is fantastic from beginning to end, yet his larger, more encompassing work on books like Final Crisis doesn’t capture that intricacy and tries to do too much. In doing so, it becomes disjointed and harder to read. This issue of The Return of Bruce Wayne particularly jumps back and forth between those extremes, taking away from what still has the makings for a great story.

The art however leaves a lot to be desired. Much of the artwork feels flat, and although it’s painted beautifully, it feels very dull. Frazer Irving’s use of darker inks in danker locales comes out nice, and there are some nice moments where the atmosphere and mood of the panels are captured. An example includes when Annie is nursing Bruce back to health and the shot zooms to their silhouettes. Moments like this are well done, most moments where Bruce Wayne is the focal point are in fact. Artistically it works well with Morrison’s style, but on its own it’s simply flat.

I still feel like there’s enough intrigue in this story to warrant a following, but at this point I would have to say that Morrison’s detractors may not enjoy this work, and may become a little lost or confused at times. Even still, the book does hit its points for the most part in how Bruce Wayne is characterized, something Morrison does exceptionally well. Batman fans should stick around if only to see where Morrison is going with this, because it does seem fairly well thought out similarly to the rest of his run. However, those who aren’t Batman fans or Morrison fans for that matter may want to stay away from The Return of Bruce Wayne entirely.