Today, Oni Press released the cover, title and release date for the sixth and final volume of Bryan Lee O’Malley’s award-winning “Scott Pilgrim” series of graphic novels via their official blog. The book will be titled “Scott Pilgrim’s Finest Hour” and hits comic shops on July 20, 2010. 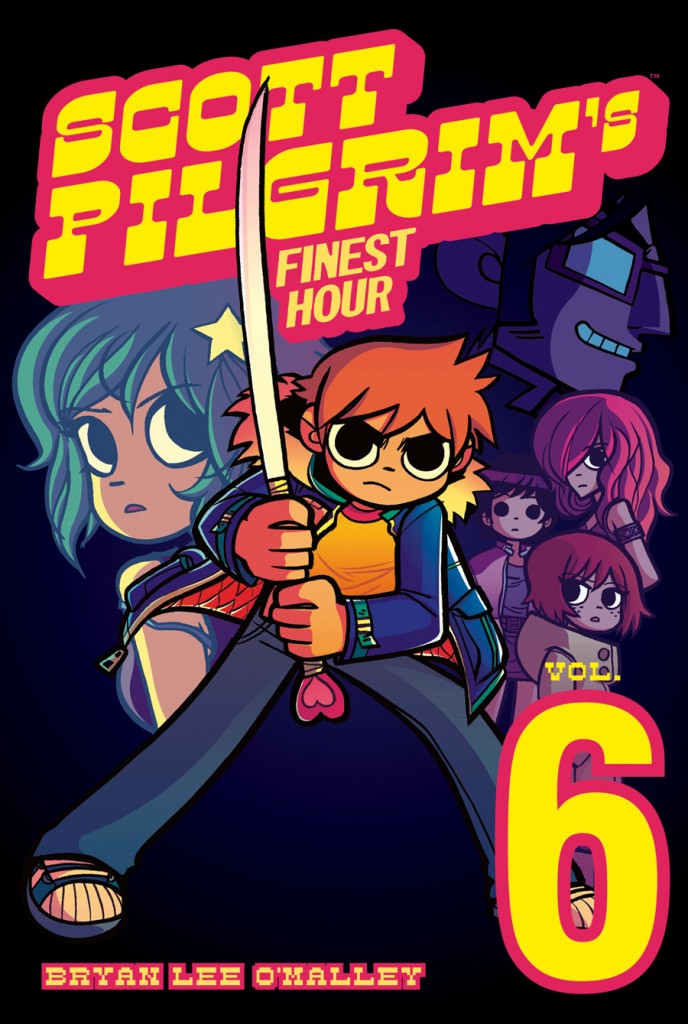 “It’s been quite a ride, and I couldn’t have gotten here without the support of the fans and the retailers,” said O’Malley. “It feels great to be in the home stretch, and I think this is going to be the best Scott Pilgrim book ever!”

Bryan Lee O’Malley and the SCOTT PILGRIM series have both been honored with multiple awards including the Harvey, Doug Wright, Joe Shuster, and National Cartoonists Society Reuben awards, in addition to being named Entertainment Weekly and Wizard Magazine’s Independent Comic of the Year. Series Editor and Oni Press Editor-in-Chief James Lucas Jones gave additional praise to O’Malley, “it’s been an honor working with Bryan over the years. He’s got such a unique voice and I’ve been fortunate to witness him develop a style unlike anyone working in the industry today; a style that I feel will influence many future generations of comic professionals. I’m so proud that Oni has been a part of that.”

Oni Press will be rolling out a series of event announcements in the weeks and months leading up to the release, including Bryan Lee O’Malley signings at this year’s sold out San Diego Comic Con. Oni Press Publisher Joe Nozemack said about the works, “I’m convinced that Scott Pilgrim will go down as one of those series that changed comics forever. When I’m out and see someone wearing a Scott Pilgrim t-shirt or sitting in a cafe reading one of the books, I get so excited about comics entering the mainstream and to know that Oni Press’ books are helping lead the way, it’s an indescribable feeling. I can’t wait to see the reaction to the final volume!”