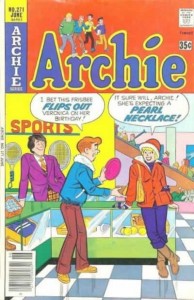 This comic has become a cult classic. The “Pearl Necklace” issue always sells for multiples of guide at the conventions and on eBay.

The rather harmless sounding “pearl necklace” makes its sexual connotations perfect for innuendo. ZZ Top did a song about it and Archie had a cover devoted to it! Subtle little visuals like the guy behind the counter playing “pocket pool” and the other guy on the escalator looking over and smiling make it appear that they are in on the joke.

The whole Archie, Betty and Veronica love triangle make the Archie Comics fertile ground for content that may seem at times inappropriate. Sleepy Censors has a nice stash of just such comics and we just can’t wait to share them with you.