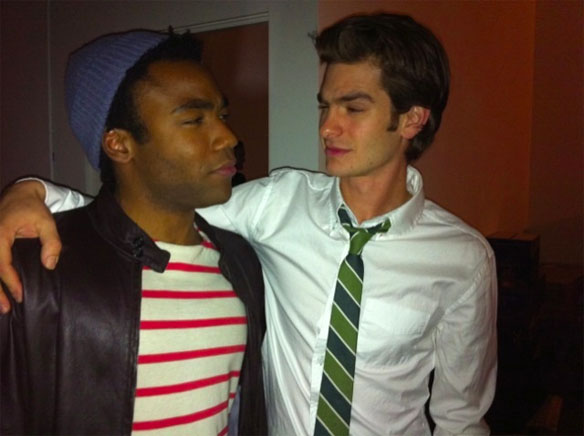 For those of you not in the know – that’s Andrew Garfield the new Peter Parker. He who looks like a Ditko drawing, all bushy eyebrows and thin, bordering on sickly physique. He’s a good actor to boot. So that’s fine, he does melancholy quite well, which I’m sure will work well for Peter Parker.

But… we can all pretty much write off the new Spider-Man film right? They’ve already cast Uncle Ben (Martin Sheen) so we’ll have to deal with a big ol’ chunk of origin – something that Sam Raimi already did, and quite frankly something no one needs to see again. I’m sure it’ll be a good film, but I can’t see it being all that different from what was previously put to film.

Now a Donald Glover Spider-Man would have been totally different.

For those of you who forgot the Donald Glover 4 Spider-Man campaign and it’s subsequent reveal of the previously unknown demographic of racist comic-book readers who couldn’t except a black Spidey.

I’m not saying it’s because the race change would mean everything would be different. Far from it. As mentioned above Garfield is a very good dramatic actor, watch Red Riding Part One for proof. But I think he’ll fall in line with Tobey McGuire when it comes to Spider-Man, ie: not funny.

Glover is hilarious – and a pretty damned talented actor to boot. He’d be the ideal Spider-Man. Quick witted, spouting one liners that would probably even make most villians stop and laugh.

I really do hope that the Spidey reboot is done well, but I really think they’ve missed the boat by not casting Donald Glover, the ideal Spider-Man.