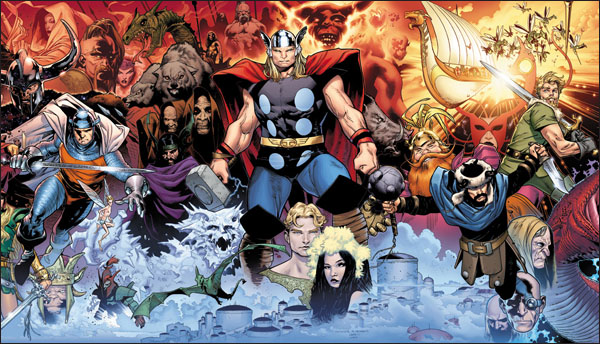 as Odin, Renee Russo as Frigga, Ray Stevenson as Volstagg, Tadanobu Asano as Hogun, Josh Dallas as Fandral, Jaimie Alexander as Sif, Idris Elba as Heimdall, as well as Colm Feore, Kat Dennings and award-winning actor Stellan Skarsgård. The film is slated for release in theatres domestically on May 6, 2011 via Paramount Pictures which will also release the film on a worldwide basis.

The epic adventure THOR spans the Marvel Universe from present day Earth to the realm of Asgard. At the center of the story is The Mighty Thor, a powerful but arrogant warrior whose reckless actions reignite an ancient war. Thor is cast down to Earth and forced to live among humans as punishment. Once here, Thor learns what it takes to be a true hero when the most dangerous villain of his world sends the darkest forces of Asgard to invade Earth.

In addition to THOR, Marvel Studios is also scheduled to release a slate of films based on the Marvel characters including IRON MAN 2

About Marvel Entertainment
Marvel Entertainment, LLC, a wholly-owned subsidiary of The Walt Disney Company, is one of the world’s most prominent character-based entertainment companies, built on a proven library of over 5,000 characters featured in a variety of media over seventy years. Marvel utilizes its character franchises in licensing, entertainment (via Marvel Studios and Marvel Animation) and publishing (via Marvel Comics). Marvel’s strategy is to leverage its franchises in a growing array of opportunities around the world, including feature films, consumer products, toys, video games, animated television, direct-to-DVD and online. For more information visit www.marvel.com.