It’s been out for a while now, but let’s take a look at this nice big picture featuring the three principal actors of the Thor movie. 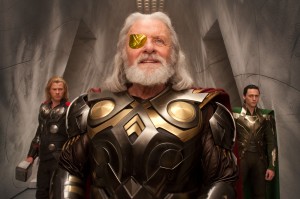 I gotta admit, they look very snazzy if a bit anachronistic due to the chestpiece of Odin looking like he ripped it right off of Iron Man’s chest.

Thor: He looks great, he looks like they took the updated look in the JMS run and ran with it while dropping aspects that would look kind of silly, like the helmet with the wings. It looks very accurate with the scale mail arms and plate chest piece which seems very difficult to wear, 2 kinds of heavy armor on top of each other. The lower half of the costume like the pants are rather plain which is a good thing as they aren’t an area people tend to focus on unless there is something unusual about them to draw our attention to. Which brings us to Loki.

Loki: The biggest deviation in costume design is probably Loki’s,  the normal Loki costume is a mix between Cirque Du Soleil performer, a bull and a banana. This is probably for the best, as the regular costume just wouldn’t translate well. The pants just look odd though on him, the brown leather seems to really…accentuate the package area and it looks like he is wearing a giant jock strap or he shoved a bunch of tube socks into his pants. They managed to somewhat keep his color scheme intact through the bright green cape and the brassy yellow armor plating.

Odin: Out of all the cast, while not terrible, the look of Odin could most use a little tweaking. I’m not sure why instead of a nice old eye patch they decided to go with some kind of metal plate on top of his eyes. And his chest piece honestly looks like they grabbed spare props from Iron Man. Anthony Hopkins definitely was the right choice to be Odin, just give him a nice black eye patch and it will be picture perfect.

Update: I didn’t think they would give them the helmets as they just look ridiculous in the comics and I imagined them to be moreso on film. But it looks like they’ve reined in the helms a bit and they don’t look so silly from a long telescopic view. but when they do close-ups it could be a whole other matter. Imagine them having to keep on panning out to keep the entire head in the shot! 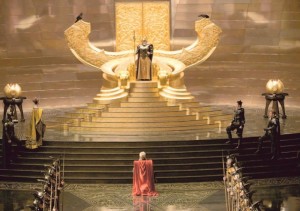 David Diep is a news editor for ComicBookDaily and is very worried that he’s done two commentaries on outfits given that he dresses like a hobo.