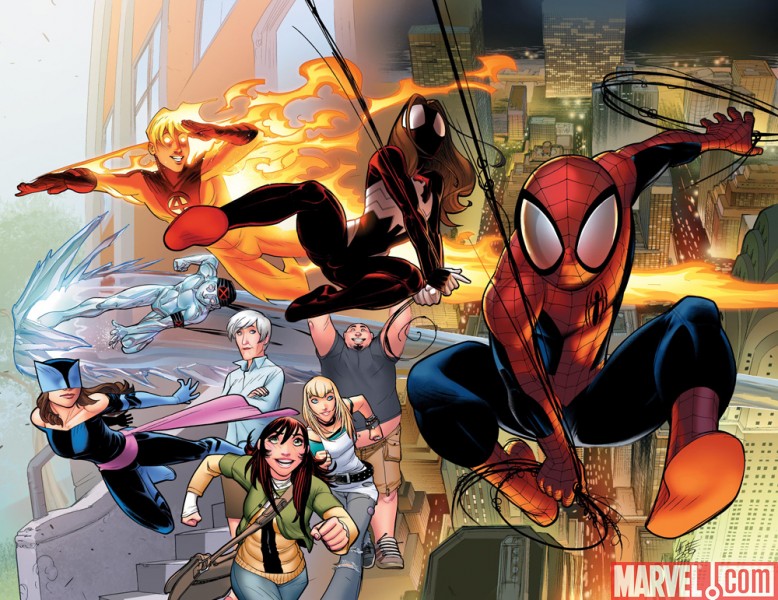 Ultimate Comics mark two has been a strange beast. I really don’t know if I like it.

I want to like it, after all the original Ultimates line is a pretty fantastic concept that actually worked out. It gave us awesome stories with Ultimate Spider-Man, Ultimates Vol. 1 and 2 and a good third of Ultimate X-Men*.

Ultimate Spider-Man is pretty much the crown jewel of the line, the one the rest were compared to.

I switched to trades when it was relaunched post Ultimatum as Ultimate Comics Spider-Man, and found that it kept going without missing a beat. In fact, I found David Lafuenta’s art to be actually more fitting than any of the artists who came before, and while it looks like he’s going to be off the title to make room for Sara Pichelli as the series regular artist, that’s not a bad trade whatsoever.

So, after rocking the “Ultimate Comics” heading for 15 issues, “Ultimate Spider-Man” returns to its original title and numbering in celebration of its 150th official installment and the tenth anniversary of the Ultimate Universe itself.

Here’s how Marvel breaks down the issue’s story content:

“Poor Peter Parker has made such a mess of his life as Spider-Man that the other super heroes are forced to gather together and decide once and for all what to do with the young wall crawler. Guest starring the New Ultimates, the Storm Siblings, Ben Grimm, Iceman, Kitty Pryde and a slew of surprise stars! Also includes reprinting of Ultimate Spider-Man Super Special #1 featuring an all-star artist line-up!”

As [email protected] points out, it’s not yet known whether the series’ name/numbering change will stick following this special issue. The shift certainly wouldn’t hinder Disney XD’s upcoming efforts to brand the animated “Ultimate Spider-Man” series, though.