We’re back with some more interviews from this year’s Fan Expo in Toronto. We’ve got our editor in chief, Pete Decourcy speaking with Cameron Stewart and Ray Fawkes about Apocalipstix and some of their future projects. As always, look below for the audio portion of this interview or read on for a transcript of the interview as transcribed by our news editor; David Diep. 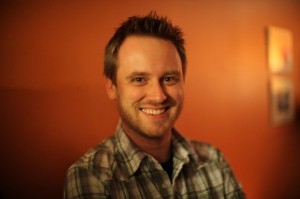 CBD: So we’re here with Cameron Steward and Ray Fawkes.  So with Apocalipstix, when are we going to see volume 2 coming out?

Cameron: [laughs] That’s…I can’t give you an answer on that unfortunately. Ray has written it entirely, it’s been written for a very long time actually, so he’s not the problem. It’s me that’s the problem. I unfortunately, have had a lot of other work I’ve had to take up-

CBD: Which is great.

Cameron:  It is great and I’m thankful for it. It’s just one of the cases of having to earn a living and or projects that I really can’t say no to, that have fallen-

Cameron: And Seaguy, exactly. And so, unfortunately, it’s just been difficult. I’ve only got so much time. And I’ve gotta prioritize things and I swear to God, it’s coming! I’m not gonna abandon it; it’s not one of those things where I’ve been “ahh the first issue whatever and now I’m not gonna do it”. I mean, I will do it, but

CBD: The store I work at, everyone’s grabbed the first one it’s like the Scott Pilgrim thing, everyone is “where’s the second one” ya know?

Cameron: That’s what our publishers keep telling us too, yes. [laughs] And it’s very encouraging to know that people are coming back for the second one. I’m trying- my plan is once I clear all the work that I have, I’m gonna be then able to devote an exclusive chunk of time to doing it, so I can do it fast. Cause the deal with Oni Press is you don’t really make a page rate on it the way you do with Marvel or DC or whatever. And so, to do a book of that length, it’s a significant investment of time and a significant amount of time with no income. So that’s what makes it hard to sort of justify saying” Well I’ll take 6 months and do this”. But hopefully by the time I’m finished all the other stuff I have to do, I have enough savings so that I can kind of work for a while and finish it. So I can’t say when it’ll be, but it will be done.

CBD: Ok, that’s cool, that’s pretty much…what are some of the projects that have that you can talk about at least?

Cameron:  At the moment, I am doing a part of a graphic novel based on the Prince of Persia, a Disney movie based on the video game series. It’s an anthology book that will be coming out from Disney before the movie that’s a bunch of different artists all working from a script. It’s an anthology title, not a direct adaptation of the film, it’s a bunch of different stories with the same characters and it’s all written by Jordan Mekner, who is the guy who created the video game.

CBD: He just had a graphic novel for Prince of Persia that came out as well, right?

Cameron: Yeah, that’s what’s kind of cool about this. I’ve done movie-tie in stuff before and licensed stuff before-

CBD: I’ve got to tell you, your Batman; The Dark Knight that children’s book thing? I don’t know I-

Cameron: Can we edit this part out? Because I don’t even want it to be known that I did those. [laughs]

CBD: Really? Well I gotta tell you, I love those. [laughs]

CBD: Well you know, everyone’s gotta do one of those, right? It’s like you said, you do that kind of thing and it frees you up to do stuff like Apocalipstix, right?

CBD: But yeah, I actually got it for my niece or godson or whatever. (Yes, you should be slightly concerned that Pete cannot tell the difference between his niece and his godson)

Cameron: That’s the audience for it.

CBD: She loved it, she couldn’t see the movie and now she knows why exactly she was dressed up as the Joker. She just likes to throw pies and stuff.

Cameron: [laughs] So I’ve done these movie tie-in things before and you know, I haven’t really enjoyed a lot of it and when I was asked to do this Prince of Persia thing you know, one of my first questions was; “is this going to be a typical movie tie-in?” And the editor said “no no no, it’s gonna be really cool and you can draw it in whatever style you want, it’s not something that has to be cross checked with photos of Jake Gyllenhall to make sure the likeness is correct in every panel, it’s like I have a lot of freedom on it. Which was really cool and the story is pretty interesting. So I think it will be pretty- and the line up of artists on it is really great.

CBD: Can you slip us any names?

Cameron: Tommy Lee Edwards, Tom Fowler, Niko Henricon ahh who else? A couple other guys I can’t- Todd McFarlane is doing the cover and it’s really cool! And yeah, so I think it’s gonna be- and because it’s Disney, they’re putting a huge push behind it. It’s gonna be a big book. It’s gonna have a lot a media presence and you know, it’s a tie-in with their huge tent pole movie of the summer, right? It should be a big thing. So I’m doing that. I am doing a very big book for DC which I’m not allowed to say yet, but I’m already working on it.

CBD: Can you let slip maybe who the writer is?

Cameron: No, I can’t, I really can’t. I’ve already- I keep asking, I keep talking to my editor; “ok can I say THIS at least?” and they go “no, keep it under your hat for now”. So unfortunately, I can’t tell you, but it is big. I will say that, it is big. And then I have a web comic that I write and draw.

CBD: Transmission X, I can’t wait- I’m going to be there, covering your panel.

Cameron: So that’s what I’m doing. So yeah, my plate’s pretty full. And then Ray’s doing a lot of stuff too.

CBD: So what are you working on now? (Addressing Ray Fawkes) 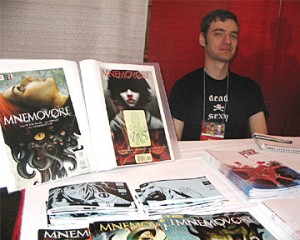 Ray: I’ve got a book coming out from Top Shelf next year called Junction True which is a long time coming. Vince Locke is painting it and you might remember his stuff from Deadworld way back and now he does a lot of painted stuff for bands like Cannibal Corpse and stuff. It’s beautiful, it’s a beautiful book.

CBD: that is awesome.

Ray: It’s a fantastic book and I’m doing another book for Oni that is unannounced at this point but hopefully you’ll be able to hear about it soon.

CBD: I hope so. Well that’s cool. I guess, if I could just- I guess, trying to think of where I should go…first off, A; Catwoman by Ed Brubaker is one of my all-time favourite series.

CBD: Probably the best things I’ve ever read in terms of the Crime genre, especially from DC. And they have some pretty decent stuff. Any kind of return to that anytime soon?

Cameron: To Catwoman or working with Ed?

Cameron: I would love to. At the moment, I don’t know because I’m so busy, Ed is so busy. Ed’s Marvel exclusive now I think. And I dunno, I’ve tried to get into the door at Marvel a couple of times and haven’t had a lot of success with it.

CBD: Have you done anything with Marvel?

Cameron: I have, it’s been things for- not their- I’ve actually really enjoyed the stuff I’ve been doing. I’ve been doing stuff for their Marvel Adventures books.

CBD: Oh yeah, you had the Mini-Modok thing, I have those issues.

Cameron: I did a thing for- just recently I did a little goofy Wolverine story for X-Men: Special Class- err First Class, First Class Special it was. And those are like kind of non-canonical stuff and so therefore you can play with it and so it’s really fun.

Cameron; Right, so I think- I mean they’re happy enough to hire me for that kind of stuff, but not for you know, their more mainstream heavy hitter kind of books and you know, I would do an issue of Daredevil with Ed or something. That would be really cool. But I dunno, I would say at the moment it seems kind of unlikely not for any reason other than just we’re both so busy.

CBD: Well, thanks a lot for your time. I really appreciate both of you guys, hopefully we’ll see Apocalipstix soon.

Cameron: Yeah, we will.

Ray: As soon as possible!

Cameron: I will do it. That is my promise that it will get done. You know what, there’s 3 years between movie sequels.

CBD: [laughs] Thanks a lot guys. 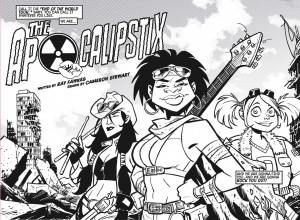